I often roll my eyes when atheists indulge "sophisticated" theological arguments. There's a belief among some atheists that Dawkins and other "new atheists" didn't engage with religious philosophy seriously enough, and that there needs to be a newer, better dressed atheism that indulges in the purportedly more nuanced and complex arguments for theism.   The problem is that without exception, every "sophisticated" argument for theism I've ever seen is couched in the same bad assumptions as the less-sophisticated ones. There is no such thing as a sophisticated philosophical argument that is based on (to name a few) Aristotelian metaphysics, substance dualism, unembodied minds, or transcendent causation. All of these concepts are absurd and false.   It's not that I don't think we should talk to theists at all; absolutely we should. But we should be very careful about the framing of the questions and be quick to identify spurious assumption
Post a Comment
Read more...

- June 23, 2021
I follow an atheist page on Facebook that talks all the time about how certain Christian apologists make "sophisticated" and "rational" arguments for God's existence that should be taken Very Seriously by atheists. Take a moment to consider the sheer absurdity of Christian apologetics on the issue of God's existence, particularly regarding the notion among philosophy/theology enthusiasts that Christian theologians can make "sophisticated" arguments for God's existence, and that these arguments are generally inaccessible to those who are not versed in the esoteric conceptual lingo of academic philosophy and theology.   Why is that absurd? Because it means that ivory-tower Christians are literally conjuring up all these complex, convoluted rationales intended to substantiate the claim that the central thing the entire religion is about - the very deity on which the entire religious practice is centered around - EXISTS. Not "matters to every
Post a Comment
Read more...

A short introduction to conceptual metaphors

In case you've never read anything I've written on philosophy or religion over the last six or seven years, George Lakoff and the field of cognitive linguistics - specifically the concept of conceptual metaphor - has been radically influential in my thinking.   This isn't a conjecture; this is an active field of scientific research bolstered by strong empirical evidence. I think understanding cognitive science is important, because it underscores an essential concept that undermines a great deal of traditional philosophy: you cannot know the structure of your own mind through self-reflection. Just like you can't study the foundation of your house from inside your living room, we have to look at minds empirically to understand their structure. And how do we study the structure of the mind, and of reasoning itself? By studying language! Hence the field "cognitive linguistics." Why's this important? Take someone like Aristotle. His metaphysics are taken to be
Post a Comment
Read more... 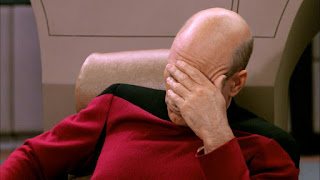 Here's a blast from the past: a Christian friend of mine on Facebook was posting about the Biblical description of the slaughter of the Canaanites; now, this person is a Randal Rauser type who essentially views the Old Testament as a messy attempt by relatively primitive people to understand God -- in other words, God didn't really command that . His post reminded me of William Lane Craig, and Bill ain't letting the Word of God off that easily. He's devoted several Question of the Week  segments to addressing this thorny topic, so I tossed a link to one to my FB buddy -- mainly so he could have a laugh. This is the link I sent him: https://www.reasonablefaith.org/writings/question-answer/the-slaughter-of-the-canaanites-re-visited/ In this response, Bill Craig manages to cram together an impressive amount of ad hoc reasoning and logical fallacies, and with his own arguments proves that he doesn't believe in his own moral ontology. Let's talk about that! Take a st
Post a Comment
Read more...

When a mob of pro-Trump extremists broke into the Capitol building yesterday, it was both surreal and strangely unsurprising. It was the logical culmination not just of Trump's presidency, but of the increasingly insular and radical conservative media ecosystem. Trump was the match, but the kindling has been laid ever since Fox News rose to prominence with its slogan "Fair & Balanced" - implying, of course, that other networks were neither. In the last few years, I and many people I know have lost relationships with family and friends as they descended down an increasingly extreme and bizarre rabbit hole of conspiracy theories and identity politics. Recently I sat quietly as my girlfriend's dad explained, without a hint of irony, that George Soros and the Rockafeller family were funding BLM and Antifa in an attempt to install communists governments in "liberal" cities, and that "Hollywood" is in cahoots with congressional Democrats in a child-k
Post a Comment
Read more...

A lot of men my age (I'm 40) get on some kind of sex-boosting pill. Snake oil supplements promising to improve your manliness quotient by 4000% are a dime a dozen. Testosterone replacement clinics are popping up all over the place (which I actually think is a good thing, but not necessarily for sex). At my work, there are basically two types of commercials on the radio: car dealerships promising easy credit approval, and male-enhancing clinics or supplements. Here's the thing about "erectile dysfunction": it's a made-up syndrome used to sell pills. There's no medical criteria for ED; essentially, a man just goes to his doctor and says he's not getting hard when he wants or expects to, or he's not staying hard as long as he wants or expects to, or he's not ejaculating as soon as he wants or too soon or not as often or not at all. Essentially, ED means "I'm not performing the way I expect to be." But where are those expectations comin
Post a Comment
Read more...

It's been a really long time since I wrote a post on one of Randal Rauser's arguments. But as luck would have it, it's a lazy Saturday, I was perusing his blog, and I found a recent post of his in which he links to the following video: Do watch the video before continuing, because I'm not going to explain what it's about. Instead, I want to systematically address his arguments as well as discuss his response to me on his blog. Just a heads-up on my own position: I think that the lack of a consensus is a serious problem for Christianity, for several reasons. First, it stands to reason that if holding true belief is integral to one's salvation, and if God loves all his human creations and wants them to be saved, it would be woefully counterproductive for God to allow humans to stumble into a vast number of schisms that often result from disagreements over basic doctrinal beliefs. Sure, some Christians disagree about which day of the week the Sabbath is supp
Post a Comment
Read more...
More posts