- January 01, 2010
I've started reading Frans De Waal's newest book, The Age of Empathy: Nature's Lessons for a Kinder Society. If you're not familiar with Frans De Waal, he's a primatologist possibly most famous for his book Our Inner Ape, which I also received as a gift over the holidays this year. My introduction to De Waal was in one of my favorite books, Primates and Philosophers: How Morality Evolved. He's featured in the NOVA special "The Last Great Ape", which I highly recommend. 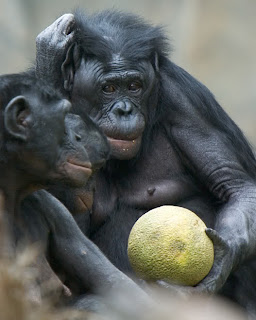 De Waal's books have a consistent theme:  That the common perception is that human morality is a triumph over our animal nature; that morality comes from somewhere else – from the church, from the law, from God – and that we need this external source of morality to conquer our competitive, selfish nature. De Waal turns this view on its head, arguing that not only is our sense of morality deeply embedded in our genes, but it is a product of our evolutionary heritage. He argues further that many of the qualities we've long believed elevate us above the rest of the animal kingdom – our ability to feel empathy, that we care for the weak and sick, or that we help others without regard to the consequences it may bring upon ourselves – are not uniquely human at all. He talks about chimpanzees slowing their pace so that injured friends aren't left behind. He talks about bonobos tending to each others' wounds, and comforting each other after conflict. He's even documented these marvelous creatures giving selfless aid to animals of other species.

It should not come as a surprise that many people – mainly religious types, to be blunt about it – tend to find this view a bit objectionable. Morality is an issue that religiously inclined individuals like to hang their hat on – suggesting that our sense of morality is derived from God and that we need faith and the guiding hand of the church to be good people. If people don't need God to be good, the church is in trouble. Geneticist Francis Collins, former head of the Human Genome Project and current director of the NIH, argued in an essay for the Templeton Foundation that if we remove God from the equation, the concepts of good and evil "have no real foundation".

But De Waal's research illuminates the deeply biological foundation of our moral compass. This view of morality does have some significant philosophical implications: it tells us that morality is not absolute or objective, but it is nonetheless integral to our survival; it tells us that "good" and "evil" are not things unto themselves, but strictly concepts used to describe behavior that either relives suffering and fosters harmony or causes suffering and division. In this context, the classic dichotomy in which "good" and "evil" are portrayed as diametric opposites seems primitive, like a sort of "Hollywood" version of morality. The real moral dilemmas we face today are not so simple as "should we indiscriminately kill others" – such things don't even enter into our realm of thought because we intuitively recognize that they are diametrically opposed to the solidarity we need in order to survive; rather, we face moral dilemmas not so easily resolved – questions like, How many resources should we expend to save someone's life? or Should doctors be allowed to assist a patient in committing suicide? These questions don't lend themselves to such obvious answers.

The real question, then, is whether a study of our biology can help us to resolve more complex moral dilemmas. De Waal believes it can, and I will be sure to publish my thoughts on his book as soon as I finish it.
Books Morality Science