How to spot a pseudoscience

- January 17, 2010
We're living in a time when, despite the rapid advancement of science over the last century, pseudoscience is as rampant as it's ever been. You'd think we'd be past the point of using words like "tonic" and "elixir", but all you have to do is pop open the Sunday paper to find plenty of ads for health tonics, anti-aging creams, and all kinds of other nonsense – not to mention the rapid rise of pseudoscientific practices like acupuncture, massage "therapy", homeopathy, quantum healing, or the granddaddy of them all, chiropractic, pseudoscience is as popular as ever. 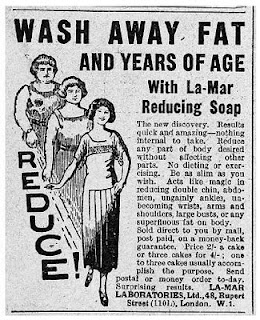 It helps, when spotting a pseudoscience, to differentiate between products and treatments. Pseudoscientific products simply make bogus claims. For example, there is absolutely no law whatsoever preventing me from dropping a few random herbs in a pill and calling it a "fat burner". As I mentioned in my recent post about the supplement industry, supplement manufactures are not required to prove either their claims or the safety of their product before bringing it to market. But it's not just supplements; how much research, really, do you think is behind any anti-aging cream, or even fancy shampoos? The answer is of course very little, if any. For this reason, any product making bold, non-medical claims should be treated with a great deal of skepticism.

It's also becoming popular for companies to claim that they conduct their own research, or that their product is "based on" research. Don't fall for it. If a company puts ten, twenty or even two active ingredients in their health "elixir", even a well-designed study would be unable to isolate which ingredients had any effect. Good research is done by independent scientific institutions on specific substances, and takes many years of repeatedly verified research. For example, there is good research showing that creatine monohydrate enhances performance for athletes doing high-intensity exercise. But now creatine is sold in a myriad of expensive, dubious formulations. Fortunately for discriminating athletes, pure creatine monohydrate can be purchased in bulk quite cheaply.

Pseudoscientific treatments are a little different. The hallmark of a pseudoscientific treatment is precisely that it does not make specific claims. In these treatments, the physiological pathways are often mystical or unsubstantiated scientifically. For example, acupuncture is based on the mystic concept that a spiritual energy, called qi, flows through specific points on the body; chiropractic is based on the unsubstantiated notion that "subluxations" in the spine cause immunohealth deficiencies; and homeopathy is based on the concept that substances retain their "essence" when heavily diluted in water (which they claim has a "memory"), even to the point that there are no pharmacologically active molecules in the solution.

Real science can give a specific treatment for a specific diagnosis, and even predict the statistical probability of a given outcome. For example, chemotherapy has been demonstrated to be an effective treatment for cancer; it's side effects are well-documented, and the probability of its efficacy – as well as the likelihood of side effects – can be statistically confirmed based on the type and severity of cancer.

Pseudoscience simply cannot do that. Instead, pseudoscience makes vague, general claims and prescribes arbitrary treatments. For example, the supplement Mona Vie is marketed as a treatment for all kinds of immunohealth conditions. I've heard people claim that it put their cancer into remission, that it cured chronic knee pain, that it relieves headaches, etc. etc. There is no known physiological mechanism by which this fruit juice concoction can do such things. Similarly, it's common to hear people claim that a visit to the chiropractor or acupuncturist cured a chronic pain condition of some sort; one friend of mine even claimed that his mother's hair loss was halted by acupuncture! The problem is that in these treatments, there is no ubiquitous, scientifically validated means of diagnosing a condition and henceforth prescribing a specific treatment for it. The treatments, like the diagnoses, tend to be arbitrary. For example, I've heard people claim that their chiropractor relieved their joint point or a "pinched nerve". However, there is simply no medical basis for diagnosing and treating these conditions through joint and spine manipulation, and the associations between treatment and relief are most likely coincidental – precisely the kind of coincidence that robust scientific research could weed out.

The bottom line here is that we should all be highly skeptical of medical claims made by people who are not medical professionals. We should also be skeptical of the testimonials of people who claim to have received effective treatment from alternative therapies. Despite the innumerable advances in science over the past century, we're still faced with a number of science skeptics who claim that poorly research, even mystical therapies are just as valid as real science. At best, these products and treatments are a waste of money that simply invoke the placebo effect. At worst, some of them may convince people with real diseases and disorders that they do not need genuine medical care, or cause serious health complications. Buyer, always, beware.
Pseudoscience