It's the end of the world! Be sure to stock up on supplies!

- January 05, 2010
My ex-girlfriend's mom was what you might call a total religious nutcase. In addition to a remarkably large and scary library that looked like a miniaturized version of the book section of Mardel, she had an attic full of supplies for the end times – which, according to many of the books she owned, is coming very soon. Notably, she had a large collection of "tribulation food" – dried food stored in big buckets that were supposed to help her ride out the end times while the world burned down around her.

Unless you've been living in a cave somewhere, you've probably heard the terrible news: the world is going to end in 2012. Depending on which loony website you visit, you'll hear everything from a rogue planet knocking the Earth out of orbit to massive solar flares destroying the planet to... well, to whatever else might make for a really stupid Roland Emmerich disaster movie. Of course, most of us aren't quitting our day jobs, and aren't particularly worried about it. In case you haven't noticed, end of the world predictions have a really bad track record. 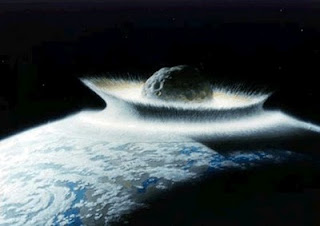 But some people are worried about it. And I mean really worried about it. They're obsessed. I think that these kinds of end-times phenomena, whether religiously motivated or not, tend to be perpetuated by credulous, uncritical people. I would even go so far as to say that these phenomena, memes of sorts, seem to thrive on an irrational fear of death that seems not only pervasive in our culture, but ironically seems to be most prevalent in the nuttiest religious loons who seem more certain than anyone about what will become of them upon their bodily demise. Because really, if the world is going to end, what's the point in obsessing over it? It's the end of the world and everyone dies. A friend of mine suggested that it's quite a romantic notion to survive the apocalypse as civilization crumbles around you – a notion that might placate the nuttier religious folks who view the rest of the world (i.e., people who don't go to their church) as a steaming cesspool of godless moral decay. Hell, that's so romantic you could make a Dave Matthews Band song out of it.

Whenever you have throngs of credulous, panicky people, you can count on one thing: someone is going to find a way to make money off of them. Case in point: the ministry that sold my ex-girlfriend's mom buckets full of disgusting dried food that she subsequently stored in her attic (she obviously assumes her attic won't be destroyed in the apocalypse, but that's another story). Exploiting stupidity is booming business, as sites like www.2012supplies.com indicate. That's just the first one that came up when I searched "2012 supplies". There are butt-tons more. I searched things like "rapture supplies", "end times supplies" and "tribulation supplies" and found similar results. Innumerable websites exist where gullible fools can by lots of worthless crap to stick in their attics. Or basements.

Apocalyptic obsessions are certainly nothing new. But a common thread among end-times predictions across all cultures is the notion that everyone dies except for the true believers. Even the 2012 fanatics predicting the annihilation of the planet are fully prepared to stock up on beans and canned vegetables and stick them in their underground shelters. But at their roots, end times predictions are nothing more than modern manifestations of primitive tribal fantasies: They get wiped out, we survive, and we get to live on, reshaping the planet into a new paradise or being whisked away into a utopian afterlife. Is it surprising, then, with the kind of cult-like "us and them" tribalism that evangelical religion fosters that such groups of people are frequently obsessed with everyone else's annihilation? For these people, the most disappointing part about end times predictions is always the day after.
2012 Conspiracies End times Psychology