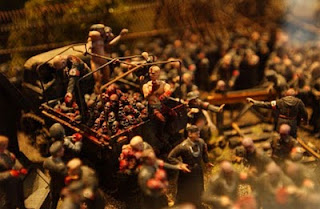 Pope John Paul II seemed to take a more liberal view of hell, describing it as "the ultimate consequence of sin itself . . . Rather than a place, Hell indicates the state of those who freely and definitively separate themselves from God, the source of all life and joy." But leave it to the newer (yet still old), more conservative Bearer of Pointlessly Large Hats to proclaim that hell is not merely "separation from God" – it's a real place where you literally get burned forever in a lake of fire.


Addressing a parish gathering in a northern suburb of Rome, Benedict XVI said that in the modern world many people, including some believers, had forgotten that if they failed to “admit blame and promise to sin no more”, they risked “eternal damnation — the Inferno”.

Hell “really exists and is eternal, even if nobody talks about it much any more”, he said


In October the Pope indicated that limbo, supposed since medieval times to be a “halfway house” between Heaven and Hell, inhabited by unbaptised infants and holy men and women who lived before Christ, was “only a theological hypothesis” and not a “definitive truth of the faith”.

Which is hilarious when you think about it, because, I am really curious, how do you test a theological hypothesis? I mean, is this data that they have? Were they visited by some corporeal spirits who informed them that in fact, purgatory is baloney? This, folks, is why theological "knowledge" is nothing of the sort – there is no methodology by which one can discern truth from falsehood.

But that's not the only thing that makes my eyes roll painfully far back into my head. It's really this concept right here:


God had given men and women free will to choose whether “spontaneously to accept salvation . . . the Christian faith is not imposed on anyone, it is a gift, an offer to mankind”.

Not imposed? You're going to the most horrible place imaginable for all eternity if you don't accept it, but hey, we're not trying to force it on you. Give me a break. The real problem with hell is that if you don't already accept that it exists and that the Christian doctrine (or whichever version of it is being peddled at the time) is true, then you can't be persuaded by threats like that. Threats of hell don't scare me because there's not a modicum of evidence to suggest that it actually exists, nor that there's anything about the Christian religion worth taking seriously. When was the last time you saw scientists or skeptics using petty threats to sway people's opinions? If the truth is on your side, the evidence will bear it out. If it's not, you may need some other tools of persuasion.

It's at this point that I would like to defer to NonStampCollector for his insight on this issue: