- February 25, 2010
Well, this article just gave me a tickle. I'm a liberal, an atheist, and I'm writing this at 3:44 in the morning. And apparently, all of these things are strongly correlated with a high level of intelligence.

I've never thought it was a coincidence that people who identify as atheist or agnostic, in my experience anyway, tend to be more politically liberal. I live in Oklahoma – the buckle of the Bible belt – and I've rarely met non-religious conservatives or religious liberals. And and I don't find it coincidence either that among the religious, those who do espouse more liberal theological views also tend to swing left at the ballot box. Now there is some good science backing this up: highly intelligent people are indeed much more likely to be atheists and liberals. 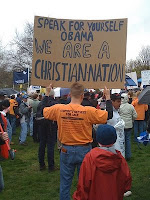 Is this really all that surprising though? I remember a survey of the National Academy of Sciences showing basically a mirror opposite of the general population of the U.S., with a paltry 7% of scientists self-identifying as religious. I also remember when Jon Stewart was on Bill O'Reilly back in 2004, and O'Reilly derided Stewart's viewers as "stoned slackers". It was subsequently amusing then when Comedy Central struck back with a couple of studies showing that people who watch the Daily Show are not only more likely to have completed a college education than O'Reilly's viewers, but they were also more likely to be better informed on a range of political issues.

Now, I have to throw in this little qualifier here: this is correlative. It doesn't mean being smarter makes you liberal and atheistic. It simply says that if you're smarter than the average bear, you're more likely to be liberal and atheistic. That means there are still plenty of very smart people who are religious and conservative. So let's not go taking this out of context to mean that people who are religious and/or conservative are stupid, or that atheist liberals are automatically smarter than religious conservatives.

How smart do I think I am? Well, I've taken a fair number of online IQ tests, and I generally score in the mid to high 130s. But, I don't know how accurate those things are. I also took the practice exam for Mensa on their website, and it told me I was very likely to pass the full test. But I haven't had the balls to take the test. I think I'm a smarter-than-average guy. Call it ego if you want, but I do. And yes, I have always associated my atheism and liberalism with having a higher intelligence. Maybe it's because I can flip on Fox News and see hour after hour of the most paranoid idiocy imaginable from the conservative movement, but I've always had a hunch that atheistic liberal types like myself are probably, on the whole, more likely to be skeptical, inquisitive and rational than religious conservative types. And now there is some good science to support my instincts.
Atheism Liberalism Science