- February 19, 2010
I have to admit that I just wasn't really paying attention. My interest in football is pretty casual, to say the least. I mean, I played it middle school and I root for the Packers since I'm from Milwaukee, but I don't really follow it or watch ESPN or anything. This year's Superbowl was especially dull to me, because I would have liked to see the Jets rob that defector Favre (pronounced "phaav-roo", which of course is Yiddish for "indecisive") of another Superbowl ring, but it was the last two teams that I could possibly care about this year. And I somehow missed the "controversy" about Tim Tebow, who is apparently a big football star, in an ad for Focus On Family, which is a group that focuses on telling single parents and women who have abortions that they are destroying the country and going to hell.

So I finally got around to watching the ad, which is actually pretty entertaining and benign. The ad prompts you to go to the FOF website, which I reluctantly did. And now that I think about it, FOF sounds like a great name for a hipster alt-rock band. There you can learn about the whole story of Tim Tebow, and be directed toward more resources explaining that abortion is bad, and Christian-based two-parent heterosexual marriage is the only way to go if you don't want to see the country descend into a distopia like Los Angeles in Blade Runner.

The gist of all this stuff is that had Tim Tebow's mom, who carried him to term at great risk to her health and life, had chosen to abort the pregnancy that we would have been deprived of Tim Tebow. Which is true, but here's the thing: we are no more likely to be deprived of a Tim Tebow through abortion than through the use of contraceptives, or the blind luck of hundreds of millions of sperm – each carrying unique genetic information – competing to fertilize a single egg. This is what's known as the Great Beethoven Fallacy, after a famous Christian pro-life pamphlet that goes something like this:

"About the terminating of pregnancy, I want your opinion. The father was syphilitic, the mother had tuberculous. Of the four children born, the first was blind, the second died, the third was deaf and dumb, the fourth was also tuberculous. What would you have done?"

"I would have terminated the pregnancy."

"Then you would have killed Beethoven."

It should be noted that this is actually bullshit, as Beethoven was actually the eldest of his siblings, not withstanding an older sibling that had died in infancy. But the fallacy remains: it would be just as likely that had Tim Tebow's mother elected not to carry him to term and instead decided to get pregnant later, we might have gotten the next Beethoven instead of a pro football player whose girlfriend has freakishly gigantic boobs. 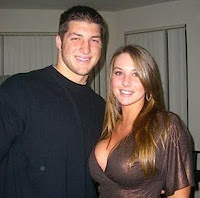 p.s. – I can't type out "Beethoven" without thinking of Bill and Ted's Excellent Adventure where they always called him "Beeth-oven".