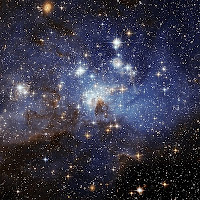 I had a discussion on my birthday last year with my Dad, who is a practicing Christian, about theology. An argument that he kept coming back to, with quite a great deal of fervor I might add, was the imponderable complexity of the universe and our utter inability to explain it. And while he did not formulate his arguments into logical syllogisms, many theologians have.

The mere existence of the universe is something that many of us, perhaps intuitively so, feel requires an explanation. Believers make the presumption that a universe as marvelous and unfathomably complex as ours requires some kind of intelligent agent to bring it to be, and on its surface such an assumption seems reasonable. But if we posit "God", a being of infinite knowledge and power, as the agent that brought the universe to be, we are left with a simple question: how did God come to be? The infinite regression becomes immediately apparent.

Believers will counter that God's existence does not require an explanation – God simply is. But why should this be the case? An infinitely knowledgeable and powerful conscious being who is capable of willing our universe into existence is certainly at least as marvelous as our universe itself – so why is it that the universe requires an explanation for its existence, but God does not?

Why can we not save ourselves this infinite regression and say that the universe itself simply is, and requires no explanation for its existence?
Philosophy