- March 21, 2010
With the health care bill on the verge of being passed, there's a chorus from the right: it will lead to socialism. First we pass tighter regulations on the insurance industry; later, we pass a public option; eventually we expand medicare to everyone, and we have bona fide socialized medicine. Then we begin to socialize other sectors, and before you know it, we're hanging Soviet flags on our porches. 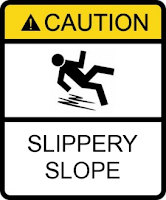 This also popped up in the news lately when a US general declared that allowing gays to serve openly in the military will lead to genocide. Openly gay soldiers weaken the military, he reasoned, which makes for defeat in battle, which means our enemies will then slaughter us wholesale.

This is called the slippery slope fallacy. The fallacy lies in the claim that A leads to B, B leads to C, etc. etc. While a slippery slope argument can be valid, each step along the chain must be independently established. For example, the establishment of medicare – a wholly public health system – was far closer to socialism than the tax incentives, federal regulatory oversight and national insurance exchange that is up for vote today. And yet somehow, the country has remained far from being a socialist republic. That is because there is, of course, a middle ground – we have long "socialized" our fire departments, our police, our military, our water supply, and accepted strict regulatory oversight over the food, drug, aviation and communications industries; yet we've never come close to being a socialist or communist country, and we're still not even remotely there, not withstanding the ignorant cries of tea-party protesters – the government still holds less than 1% of all business and corporate assets.

The slippery slope fallacy is especially easy to fall for because it's an informal fallacy – that is, the form of the argument is logically sound, but the conclusion does not follow from the premises.
Logic Politics