Is there such a thing as "scientific fundamentalism"?

- March 26, 2010
After Richard Dawkins wrote a scathing op ed lashing out at the National Academy of Sciences for hosting the announcement of the 2010 Templeton Prize – an award which, according to the Templeton Foundation website, "honors a living person who has made an exceptional contribution to affirming life’s spiritual dimension, whether through insight, discovery, or practical works" – the winner, evolutionary geneticist Fransisco J. Ayala, accused Dawkins of "scientific fundamentalism":

“The scientific fundamentalism proposed by Dawkins implies a materialistic view of the world. But once science has had its say, there remains much about reality that is of interest. Common sense tells us that science can’t tell us everything.”

As the description of the prize certainly belies, the Templeton Foundation is an explicitly religious organization – one that seeks a bridge between faith and science.” Aayla holds the position that religion and science are essentially separate domains of inquiry. From the Templeton website:


In a statement prepared for the news conference, Ayala forcefully denied that science contradicts religion. “If they are properly understood,” he said, “they cannot be in contradiction because science and religion concern different matters, and each is essential to human understanding.”

Was Richard Dawkins wrong to criticize the National Academy of Sciences for hosting this event? Are religion and science really distinct domains of inquiry? 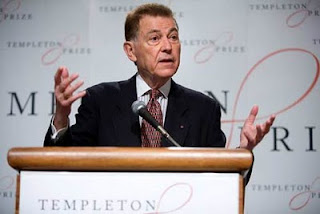 There is a major problem with Ayala's view – one shared by numerous religious scientists, I might add, including famous ones like Kenneth Miller and Francis Collins.

The problem is that religion and science can only be consider non-overlapping magisteria if religion does not make claims about the nature of reality. Of course religion does, in fact, make claims about the nature of reality. In his book A Brief History of Time, Cambridge physicist Stephen Hawking pondered the origin of the universe, and whether this was a domain forever relegated to mystery and theology, or something that could be understood with the laws of science; he describes a "no boundary" universe – one which, like the surface of the Earth, is finite in extent yet has no point which can be considered the beginning or end. He ends chapter 8, The Origin and Fate of the Universe, with the following thought:


So long as the universe had a beginning, we could suppose it had a creator. But if the universe is really self-contained, having no boundary or edge, it would have neither beginning nor end: it would simply be. What place, then, for a creator?

Clearly, this is an inescapable collision between science and faith. And while we may rightly acknowledge that Hawking's theories have yet to be conclusively proven (although a great deal of evidence has been found in support of his ideas over the last 30 years, suggesting he was on the right track), we must also acknowledge that if one claims that the universe was created, that is indeed a scientific claim – a universe that would "simply be", as Hawking describes it, should be different than a universe that was brought into existence by a god who "simply is".

We've already found a major stumbling block between science and faith, and yet the idea of a Creator is only one small part of the picture; such a view only entails the existence of a deistic god – one who set the universe into motion, but does not interfere in its affairs. But the kind of god most people believe in is a theistic god – a god who orchestrates natural events and intervenes in the lives of human beings. If such a theistic god exists, then we should certainly be able to observe evidence that this is the case. We can ask ourselves, if God [a theistic god] exists, how might the world around us be different than if God does not exist? What might we expect to observe around us? And, from those observations, what could we infer about the nature of such a being?

We might, for example, expect to see evidence that prayer works. Perhaps believers would be less likely to die in tragic accidence or natural disasters; perhaps they would, on the whole, describe themselves as happier and more fulfilled than non-believers, and be less likely to experience mental illness such as depression; and perhaps we would find that believers are more productive citizens of society, and observe that prisons tend to be filled with atheists and skeptics. We might even find that belief is strongly correlated with higher intelligence, suggesting that it is a field of inquiry that lends itself to academic rigor.

Unfortunately for believers – and as I spent a fair bit of time discussing in a recent post – none of the above holds true. Believers die from cancer, disease, famine, and natural disasters at the same rate as non-believers; they are no less likely to die or be crippled in a tragic accident; at least one study has found that believers are actually more likely than non-believers to suffer from depression; prison populations tend to be overwhelmingly religious; and it is atheism, not belief, that is strongly correlated with higher intelligence.

Richard Dawkins was right to criticize the National Academy of Sciences for pandering to an explicitly religious organization. If religion is going to make claims about the nature of reality, then there ought to be a methodology by which we can investigate the veracity of such claims. How do we distinguish true religious claims from false ones? Science gives us a sound, reliable methodology by which to discern fact from fiction; science is, above all else, the pursuit of truth. Religion, as a domain of inquiry, is doomed from the beginning – it is the only domain of inquiry which requires us to begin with an immutable conclusion.
Atheism Culture Religion Science