Showing posts from April, 2010
Show all

Quite possibly the most awesome video of all time

- April 26, 2010
NonStampCollector has made some very funny and incisive videos – and with this one on Biblical contradictions, he's outdone himself.
1 comment
Read more... 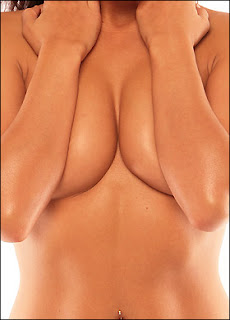 I've been following Jen McCreight's blog for some time now, and she's clearly an intelligent, witty person. So it's not surprising that she thought up "Boobquake" in response to the idiocy of Kazem Sedighi, an Islamic cleric quoted in the Chicago Tribune as saying, "Many women who do not dress modestly, lead young men astray, corrupt their chastity and spread adultery in society, which (consequently) increases earthquakes." But I don't think anyone could have foreseen how quickly it became viral, and has involved tens of thousands of women across the country and been covered by major news networks. Some people have spoken up in opposition. There's a counter-movement of sorts called "Brainquake" that's supposed to celebrate women for their intellectual accomplishments, some pissed off feminists, and some notable dissenters in the secular community. I think this all requires a little perspective. Kazem Sedighi is perpetu
Post a Comment
Read more...

The problem with Jesus' divinity 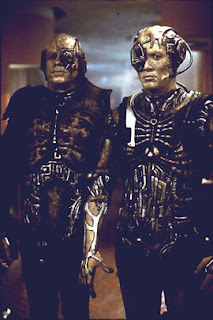 I love bashing Christianity. Not because I don't think Christians are generally nice, normal people, but because any close scrutiny of the Christian doctrine reveals it to be a hodgepodge of some of the most ridiculously stupid ideas anyone's ever conjured up. So since it's Sunday today, I thought I'd bash, mock, and criticize the completely inane Christian idea that Jesus is God. Christians are monotheists. But they're a sort of strange kind of monotheists, because they believe in a "triune" god that has three incarnations – Father, Son, and Holy Spirit. Clearly if you do not already know this, you probably wouldn't be reading this blog. But the idea of Jesus being both God and being separate from God poses a litany of logical problems, particularly in light of scriptures. We have to ask what it is that defines an individual. I mean, if God, Jesus and the Holy Spirit are truly one, they are essentially the religious version of the Borg. Individual
1 comment
Read more...

- April 25, 2010
You may have noticed that I haven't posted anything in a while. Well, I was on vacation in Bora Bora with a gaggle of sexy supermodels. At least, that's what I tell myself. Seriously though, I just have had a bit of a rough time in my personal life, and I needed a little time to sort some stuff out. But I'm back. I've got three blogs drafted, mostly finished, that I'll post up very soon. I also plan to start transporting content from my old blog, The Apostasy , to this blog, so I can delete that old blog. It should make for good filler when I don't have the inclination to type up anything new. So, thanks to my readers, if you've stuck around – both of you! ♥♥♥ - Mike
3 comments
Read more...

The Case for Christ: The Movie: The Critique – Part 3

- April 12, 2010
In part 2, Lee Strobel continued building on his house of cards and tried to argue that Jesus was actually God, and not just some guy. But the notion that we should nonchalantly accept a bunch of supernatural historical claims is a clear-cut case of special pleading , and he doesn't do as Carl Sagan would have demanded and present extraordinary evidence for such extraordinary claims. Then he goes on talking about fulfilled prophecy, which is wholly debunked with a more parsimonious explanation that doesn't require us to believe in supernatural magic.
5 comments
Read more...

The Case for Christ: The Movie: The Critique – Part 2

- April 11, 2010
First, a recap. Lee Strobel makes a thin case for the gospels being eyewitness accounts of Christ's ministry, apparently oblivious to scriptures where Jesus is alone (yet we're told every word of prayer) and mountains of modern research that shows eyewitness testimony to be horribly unreliable anyway. Strobel spends twenty minutes explaining how great eyewitness testimony is and how meticulous the oral tradition is. Then, when presented with a litany of contradictions between the gospels, basically just says, Oh, well, you'd expect that . Huh? So, eyewitness accounts are reliable, but not that reliable. Oral tradition is meticulous, but not that meticulous. What is the independent criteria for objectively determining an acceptable level of disagreement between the gospels? Sorry, it's trick question – there is none. They just baldly assert that the gospels have just the right amount of disagreement; any more or less would be bad. Any fool can smell the circular reaso
2 comments
Read more...

The Case for Christ: The Movie: The Critique – Part 1

- April 11, 2010
Lee Strobel is an ex-atheist. Now, far be it from me to pull out the no true Scotsman fallacy and suggest that he wasn't a "real" atheist. Being an atheist means you don't believe in God. It doesn't mean you're well-versed in science, theology, or philosophy. Yet, I get the sense that Lee Strobel was a discontent and naive atheist. In his aptly titled book The End of Reason , Ravi Zacharias goes on about how atheism led him to attempt suicide. Strobel never mentions anything so grim, or really (at least in this movie) goes into any detail about why he was an atheist, but I get the feeling that he was deeply troubled by his non-belief, just because he seemed so hellbent on disproving Christianity to himself. Perhaps it was an honest search for knowledge; perhaps he yearned for the comfort of religious belief. Who knows.
2 comments
Read more...

Dawkins, Hitchens, plan legal ambush of Pope. I one-up them both. 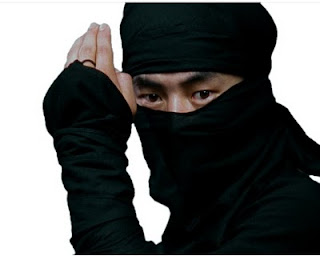 http://www.timesonline.co.uk/tol/comment/faith/article7094310.ece Well, this is juicy. Richard Dawkins and Christopher Hitchens want to arrest the Pope. And it actually sounds like they might pull it off, based on the legal jargon. From the horse's mouth:
Post a Comment
Read more...

The Case for Christ: The Movie

- April 10, 2010
Coincidentally, a friend of mine mentioned Lee Strobel's book The Case for Christ , and then tonight while I was browsing Hulu, what did I find? The Case for Christ movie . I watched a little bit of it, and was making mental notes of the holes in reasoning (there were a lot, even just toward the beginning of the movie). Anyway, I'm going to force myself to sit through this thing and write up a little critique.
Post a Comment
Read more...

The Expendables: All that's old is new again

- April 10, 2010
Alright, so, from time to time I like to take a break from all this sciencey philosophicalish jibber jabber and write about something a little more lighthearted. I recently discovered the trailer for Sylvester Stallone's The Expendables , coming out later this year. I don't really know what the plot is. Something about a bunch of mercenaries taking a tough job, and through it all they probably kill a bunch of people and learn some life lesson that brings them closer together. I don't care. Nobody's going to watch this movie for the story. They're watching it because it has Stallone, Jet Li, Jason Statham, Randy Couture, Steve Austin, Dolph Lundgren, and cameos by Bruce Willis and the man himself, Arnold Schwarzenegger.
Post a Comment
Read more...

The Christian reaction to outspoken ex-Christians 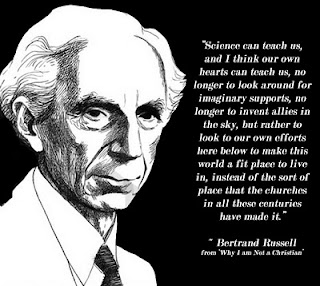 Depending on which study you look at, the decline of religious faith in the United States is no small matter. A study by the Pew Research Foundation in 2007 shows some interesting statistics for Americans: More than one-quarter of American adults (28%) have left the faith in which they were raised in favor of another religion - or no religion at all.
3 comments
Read more... 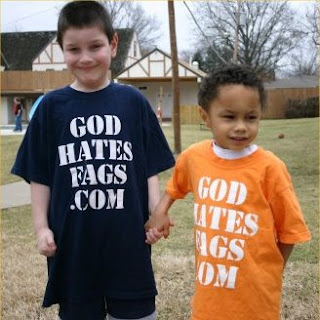 Continuing my thoughts on abuse from the previous post.... It is sometimes argued by theists that we don't actually need to address people's faith in order to sufficiently address problems of faith-rationalized abuse. From a discussion with my older brother, a devout Christian (the quoted paragraph is my own, followed by his response): "We can't just say "x constitutes abuse" when people are saying their religion makes it right. You have to address the fallacy of their beliefs." On the contrary, that's exactly what we do by majority rule in our society. For example, if an Appalacian snake handler hands their kid a venomous snake, DHS will remove that child. Religious rite or not, it's child endangerment. Addressing underlying belief systems is not at all a prerequisite to protecting kids.
Post a Comment
Read more...

Is it "abuse" to raise a child in the church? 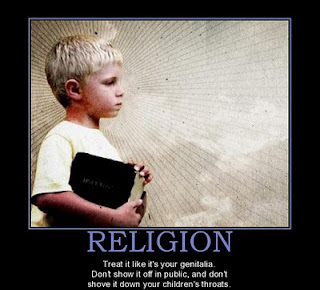 I saw a fellow atheist friend of mine on Facebook join a group called " Religious Indoctrination of Children is Child Abuse ". The issue was popularized, in my estimation anyway, by Richard Dawkins' The God Delusion in which he makes just such an argument. And yet, I don't know that I fully agree with that idea, at least to the extent that it is being popularized in the new atheist subculture. I think that religious indoctrination is a bad thing, certainly; and while I would agree that certain types of religious indoctrination could qualify as child abuse, I don't know that I would go so far as to paint the entire issue with such a broad stroke.
Post a Comment
Read more...

The Vatican: people are attacking the Pope because they hate how good he is

- April 07, 2010
Vatican Blasts Anti-Catholic "Hate" Campaign Of all the ridiculous, pompous, self-aggrandizing nonsense that the Vatican could spew in the midst of widespread abuse scandals, possibly none of them are more condescending than the allegations made by Cardinals Julian Herranz and Angelo Sodano: it's because the Pope and the church represent a higher morality than the rest of us minions wish to adhere, so people are just rebelling against the church out of their own self-interest. As Sodano put it:
5 comments
Read more... 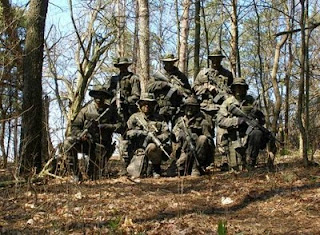 A while back I blogged about the witch hunts in Africa , and how they were solely the result of Christians spreading their religion to ignorant, superstitious people who don't know any better. The point can't be understated: as long as there is no objective, independent criteria for interpreting the Bible correctly, people will impose on it whatever sociocultural biases they want and then, in a gobsmacking display of circular reasoning, use this as an anchor upon which to assert the infallible truth of their made-up religion.
Post a Comment
Read more...

- April 04, 2010
A couple of links I slapped on my Facebook that I thought I should share with both people who read this blog. First, PZ Meyers destroys the Easter story with panache I could only hope to achieve. Then, once you realize how stupid and mindless Christian theology is, you can watch the following video and purge yourself from religion entirely, and be better off for it:
Post a Comment
Read more... 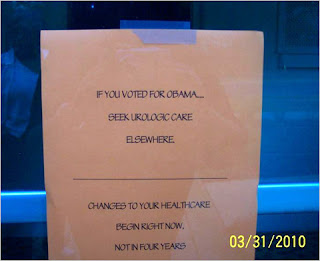 Yesterday I awoke to a friend on Facebook copying an op ed from Ben Stein, written prior to the passage of the health care reform bill. There was no link included, but the gist of the editorial was that "Obamacare" was socialism and your doctors would be replaced with bureaucrats, that Hillary Clinton enabled Iran to develop nuclear weapons, that climate change was a farce and any legislation to control it would take away our freedom, and on and on. It was a remarkably poorly written editorial, seemingly focused on health care but containing a random smattering of neoconservative buzz words.
3 comments
Read more... 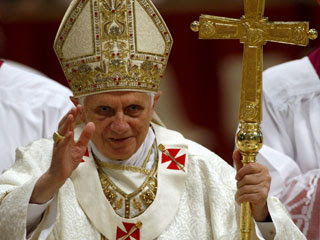 Last night I was watching CNN. I often just leave the video section on while I practice guitar or do other things. There was a segment about the shadow of abuse scandals, in which the Pope himself may have been culpable in a cover-up, that is hanging over the Vatican as it goes through Easter Mass. Some spoke out in defense of the Pope, and in defense of the Catholic faithful.
4 comments
Read more...
More posts