The real reason for the recession: fat people 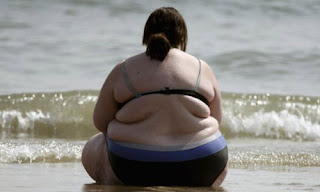 For some, it's de rigueur to blame Wall Street's irresponsible investing for the economic recession. For others, it's bad lending practices and poor federal regulation of financial institutions. For others still, it's unchecked consumerism — people living too far beyond their means for too long. I, your friendly neighborhood hotness engineer, would like to offer another explanation for the economic crunch: fat people. That's right, fat people are to blame for everything, and I don't just mean keeping drivel like The Biggest Loser on the air all these years.

I purchased a health care plan from BCBS back in 2004. As a strapping young lad in good heath, I was able to get a pretty reasonable rate; I paid just a tad under $100 a month. I recently switched to a hybrid HSA/PPO with Assurant after BCBS skyrocket my premiums to over $200 in just a few short years. And you know whose fault it is? That's right: fat people.

It's tough to find recent numbers, which is just that much more disturbing since we all know that health care has only gotten more expensive and the obesity problem has only gotten worse. But according to the CDC, circa 1998, complications arising from people being overweight or obese accounted for roughly $75 billion in health care costs (in current dollars, that'd be roughly $96 billion). As of 2002, obesity alone (distinct from overweight) accounted for nearly 12% of total health care costs. That may not sound huge, but it's tens of billions of dollars spent treating diabetes, heart disease, GI disorders, cancer... the works. And according to a 2005 study by the RAND corporation, obesity accounts for a 36% increase in inpatient and outpatient costs and a 77% increase in medication costs.

And that's the tip of the iceberg; there are countless other costs associated with obesity. Think about things like fuel costs. According to a study out of the University of Illinois, a whopping 1 billion gallons of fuel consumed each year can be attributed to fat people. Of course, fat people also eat a lot more than everyone else, and that food doesn't get transported for free on the magical bus of deliciousness. I'm sure that if anyone studied the fuel cost of transporting food to feed the portly people of the world, it would be pretty sobering.

And make no mistake about it: fat people are indeed lazy too. Obesity is the #1 cause of lost productivity in the workforce. One study found that nearly 7% of obese employees have some kind of work limitation, while only 3% of healthy employees do. A recent study out of the University of Cincinatti put the annual cost of lost productivity at about $500 per lard ass — and when over 60% of people in this country are overweight or obese, that's a lot of money. And next time you see a story on the news about more companies dropping health care benefits, ponder the fact that fat employees account for 77% greater health care costs for businesses compared to healthy people, and businesses spend around 43% of their entire health care costs covering complications stemming from obesity.

And you know what's even more messed up? According to a recent study from the University of Arizona, we waste literally half of our food here in the U.S. All that food for all those fat people, and we still have billions of tons of leftovers, roughly 82% of which are from Outback Steakhouse. It's shocking that when there are millions of people dying of starvation all over the world, we're eating ourselves into a recession and we still throw half of it away. Maybe if people learned that the decisions they make really actually do affect everyone else, they'd act just a tiny bit more responsibly. Chew on that for a while.