You can have your opinion, but you don't get to be wrong

- May 15, 2010
I recently caught a little flak from some conservative friends of mine after I posted a sarcastic status update on my Facebook regarding Sean Hannity's "Freedom Concert", which I loathe to say is festering its way to my hometown of Tulsa. Apparently you're not supposed to say insensitive things, like "Sean Hannity is a colossal douche". I was similarly taken to task about some comments I directed at a pastor who posted some inane drivel on one of my wall photos.

I suppose that I view myself as more of a PZ Meyers than a Michael Shermer (not that I don't love Michael Shermer, because I do). I don't pass up an opportunity to ridicule overt ignorance and stupidity. I don't have any respect for uncritical adherence to false and dogmatic ideologies, be they religious, political or otherwise. 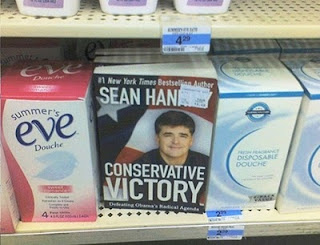 My problem with Sean Hannity isn't that he's conservative; it's that he's a liar. He lies so much that it's probably pathological – unfortunately, I think he's a true believer, not just a clever showman taking his audience for a ride. He's a truly delusional crackpot. Now, I'm fine with the rare intelligent conservative I find. I have great respect for George Will and Christopher Hitchens, even if I don't agree with them on matters of politics. But I respect them because even though I disagree, they don't go around making shit up.

I'm equally hostile toward religion, for one simple reason – because it's not true. Sorry, but you don't get to dilute science education, oppress the rights of women and homosexuals, change the laws of the country to give you special privilege, or kill other people and justify it all with appeals to your holy book. You know why? Because your holy book is bullshit. It's riddled with historical and scientific inaccuracies, internal contradictions, divinely sanctioned barbarism and tortuous theology that defies all sensibility.

Sure, religion is generally benign, and occasionally great humanitarian things are done in the name of religion. But that doesn't address the fundamental question of whether it's actually true. And since when did it become okay to cling to some falsehood just because it's occasionally inspirational? Are there scientists out there clinging to geocentrism just because it inspires them to do great deeds to protect the Earth? When we find false information, we weed it out and deal with reality. Isn't that the way it should be? What value is an opinion without getting the facts straight first?
Logic Politics Religion