- June 19, 2010
I've mentioned before that I'm a follower of PZ Myers' blog Pharyngula, as I'm sure many of you are. I like the polemical way he writes – clearly exasperated by theism and quick to mock its absurdities, but also articulate and incisively humorous. In a recent post bashing (again) the comedy show that is the Templeton Foundation, he said something I think bears emphasis:

This comment mirrors Stephen Hawking's recent statement in an interview with Diane Sawyer which I recently blogged about, in which he said:

Religious moderates want to justify their adherence to faith by claiming that it produces a positive outcome; or, at the very least, that it doesn't produce a violent, science-degrading, bigoted, misogynistic outcome. Insert all your standard stuff about hope, meaning, purpose, and all the other stuff religious moderates claim religion provides. 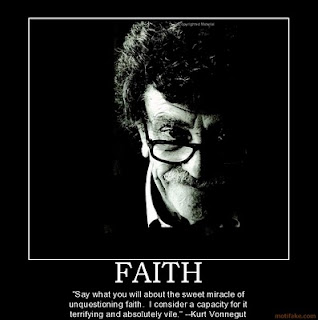 There's an elephant in the room here though, which is that since there is no methodology to discern metaphysical truth from metaphysical fiction, faith can't actually produce reliable, valid answers. People can claim it answers questions of hope, meaning, purpose, and all that other stuff, but when you inquire as to how exactly it answers these questions, you're left with a blank stare. This absence of methodological inquiry is precisely why there is virtually no homogeneity among the world's faiths, and even within any given faith you have innumerable sects and denominations clinging vehemently to conflicting ideas. Science works the opposite way: because there is a methodology for answering questions, the wrong answers can be systematically identified and discarded. The right answers can be observed and independently verified by anyone, and this builds a consensus over time.

How then do we weed out the wrong answers from religion? Religious moderates simply base it on the conclusion: if it leads to violence, bigotry, misogyny, etc. etc., then it's the wrong answer. If it leads to dogs and cats living together and world peace, it's the right answer. They gloss over the fact that the way faith claims to answer questions is fundamentally flawed and unreliable. Homogeneity of faith is only gained by acknowledging the most fundamental shared elements of religion – a higher power of some sort, a search for meaning of some sort, etc. – but the deeper we dig and the more specific we get, the more splintered the faithful become. Instead of a growing consensus, you're left with a growing divide. Some will protest peacefully, some will live and let live, others will protest maliciously, but there will always be a profound discordance of ideas.

I've often encountered religious moderates who object to atheists like me criticizing their beliefs. They say that their faith gives them a sense of purpose, inner strength, hope, or some such abstract thing, and that the real problem isn't faith, but people who use faith to justify doing bad things. But they're wrong; religious moderates give a pass to radicals and fundamentalists by disputing their conclusions, but excusing their dubious methodology. The problem is faith, precisely because in order to rid the world of religiously motivated bigotry, misogyny, violence, and all the other lunacy that's practiced in the name of God, we have to address the fundamental issue of how people know what they claim to know. When a scientific conclusion is disputed, it's disputed by pointing out that the methodology of inquiry was flawed. There is a means for correction – the errors are discard, the hypothesis retooled, and inquiry begun anew. This is how we know that science works, and that faith does not.
Atheism Faith Science