A major blow for chiropractic

- June 07, 2010
By night, I'm a fierce blogger, taking to the interwebs my swift keyboard of justice. Or something. But by day, I'm a mild-mannered personal trainer. In my field, I meet lots of people will all manner of random health problems. And a lot of them see chiropractors.

I'm of the position that chiropractic is a pseudoscience. Its risk is relatively low, but so is its efficacy. It's been around for a long time and enjoys a peculiar level of acceptance in our "alternative medicine" worshiping culture, but don't let its popularity fool you. It's woo. And now, a major chiropractic governing body has admitted that it's woo. The emphasis below is mine.

The General Chiropractic Council (GCC), a UK-wide statutory body with regulatory powers, has published a new position related to subluxation and the claims made by Doctors of Chiropractic.  The GCC was established by the British Parliament to “regulate and develop the chiropractic profession”.

GUIDANCE ON CLAIMS MADE FOR THE CHIROPRACTIC VERTEBRAL SUBLUXATION COMPLEX

The chiropractic vertebral subluxation complex is an historical concept but it remains a theoretical model. It is not supported by any clinical research evidence that would allow claims to be made that it is the cause of disease or health concerns.

In case you're not aware, the vertebral subluxation – colloquially referred to as being "out of alignment" – is the basis for the entire field of chiropractic care. There no evidence that such a thing really even exists, much less that it's the cause for any health concerns, and now a major governing body is 'fessing up to the woo.

The problem with chiropractors, of course, is that they don't just stick with spinal manipulation – they manipulate hips, knees, shoulders, etc. And in some of these cases, there may be evidence that certain kind of joint manipulation may be able to alleviate certain conditions. I'll leave that debate to the science bloggers. However, a chiropractor, despite carrying the moniker "Dr", is not, in fact, an actual doctor. They cannot diagnose or prescribe treatment for any medical condition. 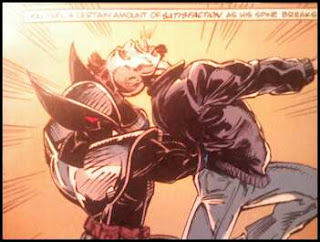 Usually when I bring this kind of article to someone's attention, the counter-argument I get is an anecdotal story about someone being helped by a chiropractor. A commenter on another blog, presumably a doctor of some sort, remarked that he had a patient who had significant back pain for years until falling down a step; she had no back since. However, this doctor remarked that he wasn't about to found a medical practice based on dropping people down steps. So yes, some practices done by some chiropractors may work for some people in some situations. But that doesn't mean it's good medicine.

In fact, the fact that chiropractic care varies so much from one practitioner to the next is a serious sign of its status as a pseudoscience. Chiropractors mix evidence-based practices with woo, often arbitrarily. A study of 200 chiropractic websites in the English-speaking world found that the majority of them made health claims not supported by evidence.

I've had a number of clients and friends visit chiropractors for years on end, spend hundreds or even thousands of dollars, and see no appreciable change in their condition. I've had clients take a chiropractor's recommendation with the same authority to which they'd ascribe a medical doctor. I hope that this statement from the GCC gets some serious publicity, and we can slowly start to put the subluxation – and chiropractic with it – in the place it belongs alongside woo like homeopathy, irridology, acupuncture, and reflexology.
Chiropractic Pseudoscience