- June 12, 2010
Kudos to Bruce Gerencser over at the NW Ohio Skeptics blog for bringing this to my attention. (Btw, if you've never read Bruce's stuff, I highly recommend it.)

I'm a big fan of Stephen Hawking. His popular science classic A Brief History of Time is one of my favorite books, and was instrumental in shifting me from a self-professed "theistic agnostic" to full-blown atheist. See, for many years after I rejected Christianity for its litany of absurdities, I still believed in some sort of higher power; partly as an emotional crutch after having been a devout Christian for so long, and partly as a classic god of the gaps explanatory device, not the least of which is the mere existence of the universe. Hawking showed me that the question "how did the universe come to be" is perhaps not a valid question at all; that the origin and fate of the universe is within the realm of scientific inquiry. It was only after being educated on the science of it all that my philosophical folly became apparent.

Hawking's recent interview with Diane Sawyer doesn't offer much new for someone like myself who's read a few of his books and watched many of his lectures, but he raised a couple of points, quite concisely, that I think are worth talking about.


"What could define God [is thinking of God] as the embodiment of the laws of nature. However, this is not what most people would think of that God," Hawking told Sawyer. "They made a human-like being with whom one can have a personal relationship. When you look at the vast size of the universe and how insignificant an accidental human life is in it, that seems most impossible." 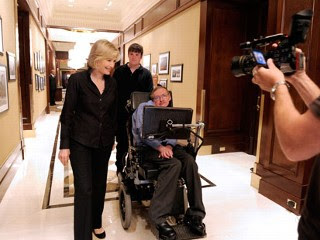 Hawking often uses the word "God" in his writing and lectures, but he does so in an Einsteinian way – as a general term for the order of the universe. He clearly rejects the concept of a theistic god, and the reason here is simple: considering the incomprehensible vastness of the universe, the billions of years that have passed on Earth before humanity appeared, the knife's edge of survival upon which we thrive and nature's utter indifference to us, it's clear how insignificant we are. This seems at odds with the notion of a loving god who created this for us, and has a special purpose for us. It's worth noting too that the idea of a personal theistic god is not a ubiquitous one in the slightest, and there is little if any agreement among the world's religion on what this higher power is and how significant we are to it.

But the best quote is this:


When Sawyer asked if there was a way to reconcile religion and science, Hawking said, "There is a fundamental difference between religion, which is based on authority, [and] science, which is based on observation and reason. Science will win because it works."

How many times have you heard those arguments that science requires "faith" just like religion does, or that science is predicated on a number of assumptions such as the natural order of the universe, that only make sense if you invoke a god of some sort as a celestial department manager?

They're bullshit, and Hawking's statement sums up why. The natural order of the universe, the consistency of physical laws, etc., are not assumptions – they are observations; observations that can repeatedly be independently verified by anybody. And the fundamental difference between claims of knowledge by theologians and claims of knowledge by scientists is that the latter can methodologically demonstrate that their knowledge is true. There is a systematic way in which errors in understanding are corrected, and further understanding is attained. Theology not only lacks such a methodology, but it is predicated on an immutable assumption – that God exists – and is thus incapable of the kind of progress that science can offer.
Logic Religion Science Stephen Hawking