If there's no God, where did the universe come from?

- August 21, 2010
The whole idea that the mere existence of all things is evidence of God is a common one. Perhaps more than any other, it's leveled at atheists like it's this big "gotcha": Hey smart guy, you can't explain how the universe got here, can you? It was God. If it wasn't God, how could anything exist? How could something come from nothing?
The answer is, I don't know. But I submit that theists don't know either – they only make an assertion. In the absence of robust scientific explanation, they claim victory. This is tantamount to someone in the first century claiming that demons cause illness. If I pointed out that this was an illogical explanation, but we hadn't yet discovered microorganisms, the theist would claim victory. It's a classic argument from ignorance. 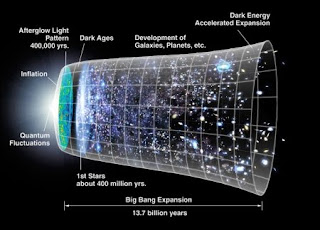 I submit that the God hypothesis is unfalsifiable, and the irony is that most theists would agree. After all, if there were robust scientific evidence of God's existence, it would be in textbooks right along side biology, math and physics. But the God hypothesis can, in some cases, be falsified. Science is in the business of observation and measurement. If something has a measurable effect on our world, we can examine it using the tools of science. For that reason, I believe the concept of a theistic god – one that answers prayers, cares about where you put your penis, brings good fortune or death upon humanity, etc. – is indeed a claim that can be subject to the rigors of science, and I've discussed that at length here and here.

But there's a bigger issue at hand, and this is where a little cosmology comes into play: how do we know the universe "came from" something else at all? The physicist Laurence Krauss did an excellent talk about what's known in physics as a "universe from nothing". There are speculative reasons to believe the universe could exist in a continual cycle of expansion and collapse, or that it emerged from a quantum vacuum and will end in a quantum vacuum. There's a great deal of inquiry about the problem of entropy. I don't know the right answer. Nobody does. There's simply too much we do not know about the universe to blindly assert that a Creator, much less a theistic Creator, was necessary for the universe to exist. It's entirely possible, as Stephen Hawking suggests in A Brief History of Time, that the universe could simply "be".

That's why the God hypothesis is unconvincing argument to an atheist: we recognize it as merely an argument from ignorance. I remember a discussion with a believer once where I was asked about the problem of entropy. I didn't have an answer, because, y'know, I'm not a theoretical physicist. But what struck me about the question was our differing views on what it meant to ask the question. My theist friend saw the mere question as evidence for God's existence. For him, the conversation was over before it started. But for me, and for the myriad of minds with intellects vastly superior to my own who are diligently studying that problem, the question is the beginning of a long quest for knowledge. And isn't that how it should be? Shouldn't we avoid pretending to know the answers to such fascinating questions?
Philosophy Science