Why are there so many religions?

- August 13, 2010
This month's Scientific American has a fascinating article on how early humans survived near extinction, with a breeding population in the mere hundreds, before our exodus out of Africa tens of thousands of years ago. The most interesting thing is that the archeological evidence discovered along the southern tip of South Africa completely rewrites our understanding of human history. While molecular evidence has firmly placed the earliest homo sapiens around 200,000 years ago, it was widely believed that our cognitive abilities did not evolve until much later; the oldest evidence of art and language dated back to some 40,000 years ago in what is now France. However, new archeological evidence described in the article shifts that back to well over 160,000 years ago. And notably this is merely the evidence we have now. It seems reasonable then at this point to assume that more than likely, homo sapiens' cognitive abilities were essentially the same at our origin as they are now.

This got me thinking about religion. The article described some evidence of rituals in these very early human cultures – including evidence of jewelry and face or body painting. Ponder for a moment the significance of this; the oldest of the major world religions – Hinduism, not Judaism as is sometimes falsely assumed – dates back a mere five or six thousand years. Judaism is marginally more recent. And it's reasonable to speculate that there may be other indigenous religious practices whose origins predate recorded history.

When I was an evangelical Christian, the plurality of religions was the issue that kick-started the inquiry that eventually resulted in my exodus from Christianity. I didn't know as much about science as I do now, but I knew enough that something just didn't seem to add up about what I'd been taught to believe. Why are there so many religions? Why did god have a "chosen people" in what was essentially tribal Palestine, when there were thousands of cultures all over the world that he simply allowed to continue on practicing false beliefs? Why wouldn't God reveal the truth to all humans from the beginning of time, particularly considering how much blood has been shed in religiously motivated feuds? Most troubling to me, though, was this: how could I be so sure that of all the thousands of religions throughout history, I just happened to be so lucky as to be raised in the one correct one?

That last statement may not resonate with all believers. Christians come in all kinds of liberal and conservative stripes; some believe that Christianity is the one true religion, and the rest are patently false paths to hell. Others believe that Christianity is the most true religion, and that while there are truths in other religions, ultimately everyone will answer to the Christian god. And still others take a more liberal "one mountain, many paths" world view in which Christianity is "true for me" but there is no presumption about ultimate truths. As a Christian, I was taught the first view, but pondered the others. Ultimately I found them futile, because the religions of the world make patently contradictory claims about all manner of things. There is no "true for me"; a claim is either true, or it's not. All the world's religions can be wrong, but not even two of them can both be right.

If Christianity, or any other single religion, were true, then it begs the question: where was God for the first 190,000 years? Why did God only decide to intervene in tribal Palestine in what is, relatively speaking, very recent human history? This begs a further question. Religion is often credited with taming our "animalistic" nature by giving us a divinely revealed system of morality. But how could we as a species have survived long enough for those systems of belief to emerge if it was not already in our evolutionary nature to live cooperatively, share resources, and care for the sick and wounded? 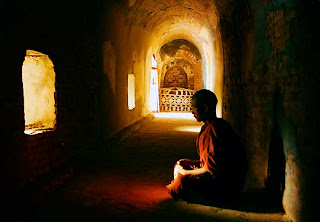 If we examine any two geographically isolated cultures anywhere on the globe, we'll find that there is virtually no homogeneity whatsoever among their religious beliefs. They won't just worship different gods; they'll have completely contradictory ideas about what god is, whether there is one god or many, or even if they serve a god or gods at all – many cultures practice animism, animal worship, or revere ancestral spirits. Some may believe that a god or gods created the universe; others may believe that the universe itself is god (pantheism), and others still may believe that the universe is infinitely old and was never "created". It's worth reiterating: they can all be wrong, but they can't all be right.

These questions became instrumental in my deconversion. The Bible held no answers, and the many Christian books I read and pastors I talked with failed to give satisfactory answers as well. They all seemed to think there probably was an answer, but no one seemed to agree on what it might be. I spent a great deal of time trying to figure out how this could all fit together. I became exhausted from the theological footwork, and eventually realized the futility of what I was doing: I was simply hoping to conjure up some sort of rationalization that would placate my nagging doubts, because I was terrified of losing my faith. But I was forced to confront the obvious question, the answer to which was infinitely more simple and logically coherent: What if my beliefs were not actually true? What if the reason why there are so many religions isn't because "The Lord works in mysterious ways", but because the god I believed in does not exist? This seems to explain the world so much better. The reason there is no theological homogeneity among geographically isolated cultures is because there is no God, and religion is simply a by-product of other evolutionarily favorable traits, such as pattern recognition. I believed Christianity to be true not because I had carefully weighed the evidence or done a study of comparative religions, but because I was young, naive, and viewing the world ethnocentrically.

I still feel that it's exceptionally rare for believers to critically examine these kinds of questions or, more importantly, critique the thought process they've constructed for arriving at rationalizations to answer them. Most believers study religion from an ethnocentric, devotional standpoint, failing to consider how their beliefs really fit with the bigger picture of humanity's long history.
Atheism Christianity Religion