Adam "Nergal" Darski on his leukemia

- September 22, 2010
In case you're not into European black/death metal, Behemoth frontman Adam Darski, who records and performs under the namesake of the Babylonian deity Nergal, was diagnosed a little while ago with leukemia. It's an advanced stage of the disease, and unless he gets a bone marrow transplant soon, the world will lose an amazing musical and philosophical mind – not to mention a cool fucking guy (I had the pleasure of meeting him briefly when Behemoth played in Tulsa, opening for Dimmu Borgir).

Behemoth is one seriously blasphemous band, which of course I absolutely love. Nergal was even arrested and threatened with jail time subject to one of Poland's anti-blasphemy laws after he ripped up a Bible during a concert. So now that he's on death's door, is he rethinking things? Maybe ready to give his heart to Jesus? This is what he had to say: 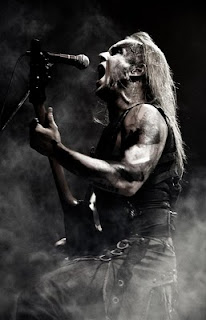 I want to comment on some opinions which, provoked by religious circles, lead to far-fetched and inaccurate interpretations. I was surprised to hear my illness became a pretext for some people to embark on their own crusade. Opinions suggesting I might come closer to God or abandon my ideals and grovel to the only correct world view in this country not only surprised but also frightened me. This is a typical example of supporting one’s own views by preying on someone’s misfortune. ‘He fell ill so he will convert to Christianity, he will discover the religion he fought against is actually close to him.’ Halt! Why should the illness change my point of view? It is true this is a difficult time for me and the thoughts of ultimate matters are hard to chase away. But the idea that I will change my opinions, priorities, and values as a consequence of my illness sounds as if someone regards my head, and not my body, ill. Suggesting I might convert are ridiculous. To what would I convert? After all, I know Christian mythology pretty well, not only in its literary version, and I find nothing good, creative or beautiful in it. I read books better and wiser than the Bible. War, blood, blackmail, rapes, incest, pedophilia, zoophilia, collaboration and treachery – each page emanates with evil. Some may say I don’t understand the message of the Bible. I’d rather say [that] Christianity is nothing more than a rusty and archaic structure that is going to fall down any moment. It lasts only because of the gullible that follow the shepherd blindly; without any questions, without any consideration, not to any promised land, but to an intellectual slaughter. So, I say to those, who see some chances to break my rules, and myself because of the illness: over my dead body!

This is what religion stoops to. You don't come to religion when you're lucid and rational. If they can't snag you through years of childhood indoctrination, they try to snag you when you're facing your own mortality. How disgustingly typical. The dogmatic vortex of religion preys on the foolish, the weak, and the ignorant. Enough of this "no atheists in foxholes" bullshit!