Sunday Sacrilege: What's the point of the devil?

- September 26, 2010
In case you haven't heard, there's a shlocky-looking horror movie coming out this week called Devil. It doesn't look like the kind of flick I need to see on the big screen, but it did get me thinking about Christian mythology, and the peculiarity of the devil as a central figure in the battle for people's souls. It's one of those things about Christianity – like Jesus being God, which means God prays to himself and sacrifices himself to himself to fulfill his own covenant – that just doesn't make any sense.

What is Satan, really, but an inordinately underpowered minion that does God's dirty work? God is supposed to be all-powerful, so any power that Satan has – you know, to torture people, tempt them, possess them, drive them insane, whatever – is power that God would have granted him. Then in the end times described in Revelation, there's supposed to be this epic battle between good and evil. Except how is anything really a battle? It sounds like the Steelers playing a local middle school team. God is all-powerful. There doesn't have to be a "battle" at all. God can just think it, and *poof*, the devil and all his minions and follows are instantly transmogrified into fuzzy lovable unicorns. 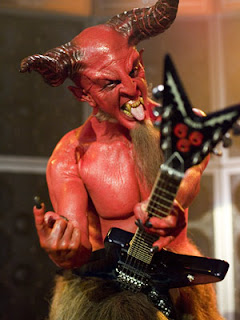 In the Old Testament, God has complete sovereign control over both good and evil. If people suffered, it was because they had been disobedient and were suffering God's wrath. This is perhaps best illustrated by the end of the book of Leviticus, where God spends a lot of time describing the massive shitstorm that awaits his people if they decide to rebel against him. But in the New Testament, God is portrayed as only partially responsible for suffering; instead, there's another player, Satan, who has demonic minions that can possess people, and who tempts people to rebel against God's commands.

The weirdest and most nonsensical of Satan's exploits is by far the temptation of Christ in the desert. It makes perfect sense until you stop for a split second and remember that Jesus is God. In a comedically flat-Earth moment, Satan takes Jesus to the peak of a mountain and shows him all the kingdoms of the world. He says that he'll let Jesus rule over these kingdoms if Jesus bows before him. But Jesus is God, and God is supposed to be all-powerful. The only control that Satan has over the "kingdoms" of the world is whatever God is temporarily giving him. How can Satan possibly "tempt" an all-powerful deity?

This is just another of many concepts in Christianity that are logically incoherent. Evil spirits and devils exist in many religions, so it's not a big shock that early Christians fabricated one too. It's perhaps most absurd because God is also omniscient (omnipotence requires omniscience, so it's a tad redundant to point it out), so God would already know what the outcome of the final "battle" is (in Revelation, guess who wins?). He would have to know that mankind would rebel against him, as well as who would end up in heaven and who would end up in hell. So it seems like the story of Christianity is really one of an all-powerful deity entertaining himself. If there's really a source of evil, it by definition has to be the all-powerful God. So who is the devil, really?
Christianity Religion