If we can't observe it, is it science?

- October 03, 2010
Thanks to Bud over at Dead-Logic, I was treated to this absolutely horrible video on the scientific method by a guy who runs a podcast called "What You Ought To Know":

Now, if you don't know why this video is so appallingly awful, it's time for a crash course on what science is and how it works, because this guy doesn't have a clue.

As many people do, he confuses the colloquial definitions of "facts" and "theories" with the technical uses of the terms. To many people, a fact is something we know with absolute certainty; a theory is just sort of a guess or a hypothesis about how something might work. But that's not how it works in science.

In science, "facts" are the raw data – the massive amount of information that we can observe. A theory attempts to explain why we observe what we do. A sound scientific theory is testable – specifically, it is falsifiable. The easiest thing to do is just give an example, and I'll use the Big Bang since the clown in the video implies that it's conjectural and unscientific.

How do we know the Big Bang actually happened when no one was there to observe it? It started when Edwin Hubble observed that all the distant galaxies in space are moving away from us at an exponential rate (as determined by their redshift), and that this is the case no matter what direction we look. If space is expanding, then everything must have been closer together in the past. This is extrapolated back to a state of extreme density – when the entire universe would be unimaginably tiny. So, how do we know this is true? I mean, it seems logical to infer that everything got smaller, but we don't know that, right? Maybe the universe was at a fixed size for a long time, and something caused it to begin expanding. 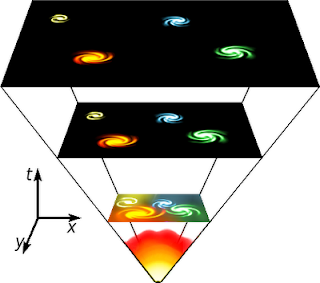 It's at this point I'll digress, and borrow a page from Stephen Hawking's new book The Grand Design. We don't really know what reality is. It sounds odd, but it's true. Imagine that you were a goldfish, living in a goldfish bowl. Your perspective would be affected by the curvature of the bowl; however, assuming you were a superintelligent goldfish, you could construct mathematical models to describe and predict the movement of objects outside the bowl. Your model of reality would be perfectly valid. So the big question is... how do we know we're not in our own proverbial goldfish bowl? Why should we assume that our immediate perspective of reality is the absolutely correct one? If you've ever read anything about general relativity or quantum mechanics, you know that there are many things about the world that are counter-intuitive because they clash with our immediate frame of reference – but they are true nonetheless. Since we don't have some objective knowledge of what reality is, what we do is construct models that agree with observation and can make predictions about what we should see.

And that's how the Big Bang, and all of science, works. The Big Bang is a model that is meant to explain why the universe is expanding. Going back in time to a state of extreme density has a lot of mathematical implications. We can test the Big Bang in a couple of ways, then: we can ask what the implications are for modern observation, and we can test the behavior of subatomic particles in large particle accelerators to see if they corroborate our hypotheses about how the very early universe (far less than one second old and thus subatomic in size) would have behaved. The biggest evidence for the Big Bang came with the COBE Satellite that was designed to detect the afterglow of the Big Bang, the cosmic microwave background radiation. Scientists working on the Big Bang had for many years calculated that if the Big Bang model were correct, we should not only observe this radiation, but it should have a particular pattern of anisotropy – nonuniformities dependent on direction. And sure enough when the satellite gazed out in the deep reaches of space, it not only confirmed the existence of the cosmic microwave background, but also showed that it has the exact kind of anisotropy scientists had predicted.

And that is how all science works. We observe facts all the time, but facts are nothing but mundane data. We have to develop models that explain why we observe the facts that we do, and we can test those models by seeing if they not only account for what we observe immediately, but can make accurate predictions about what we'll observe next. Evolutionary theory is similar; the goofbag in the video apparently thinks it's unscientific because it happened in the past, thus nobody can observe it. But we know evolutionary theory is correct because it makes a litany of falsifiable predictions about what we'll observe – patterns in the distribution of species, the location of fossils of a certain geological age, variations and adaptations at the genetic level, etc. There are innumerable instances in all of these cases where the theory of evolution could have been falsified, but instead it was corroborated.

But what about something more conjectural like String Theory and all its implications like parallel universes and 11-dimensional space? Is that scientific, or just a metaphysical grab at straws? Einstein's theory of General Relativity explains how gravity – one of the four forces of nature – works at very large scales, affecting the movement of stars, galaxies, and particles of light. Quantum theory explains how the other three forces of nature – the strong and weak nuclear forces, and the electromagnetic force – work, which we discover at subatomic scales. Quantum gravity only becomes significant at the plank scale (see the "tiny" link above), which is far too small for us to probe with modern particle accelerators. Scientists have for many decades been searching for a "theory of everything" – one theory that can accurately explain all four forces of nature at all scales. Most modern cosmologists regard String Theory, or its more evolved parent M-theory, to be the current best candidate for a theory of everything. String Theory, like anything other scientific theory, is a model, and like all models it must ultimately make falsifiable predictions. But mathematically, string theory resolves so many of the problems of modern physics that it is a very exciting prospect for future exploration. The problem is that some of the predictions String Theory makes are ones we lack the technology to test (the LHC at CERN may take us a step closer if it can confirm the existence of supersymmetry, one of the predictions of string theory), and it's so complex that not only are the answers to many of the equations mere approximations, but many of the equations themselves are approximations – meaning that as a model, it still needs more development. But I've certainly never heard any string theorist come out and suggest that we know with any certainty whether it is correct.

Science is so much more than the mere facts we can observe day to day. It's a set of tools for explaining reality, for making sense of the world around us. It not only describes what we know, but attempts to answer why we know what we know. It explains the facts we observe by developing models that not only account for the raw data we can observe, but make accurate predictions about future observations. That is what science is, and that is something "you ought to know".
Science