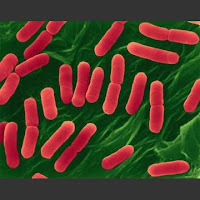 Obviously this is nothing like altruism in the sense we talk about it in humans or other primates. Our own altruistic behavior is driven by a deeply embedded biological tendency toward empathy, stirred together with a vast array of ever-shifting sociocultural ideologies. Bacteria, lacking brains, aren't capable of feeling empathy and certainly not of developing sociocultural norms.

But there is a lesson here that I think is worth shoving in the face of creationists, and that includes "theistic evolutionists" who believe our moral intuitions are derived from a divine being: that contrary to the popular misconception, nature is not "dog eat dog". Populations of species, even on the microscopic level, survive and thrive through cooperation, and self-sacrifice for the greater good is by no means a uniquely human phenomenon – it's something we can observe at a fundamental biological level across an astonishing spectrum of species.
Science