In what's become an all-too-common example of the outburst of Islamophobia in this country, a non-denominational Christian organization has been getting concerned calls from neighbors who have mistaken their church-in-progress for a mosque because it has a big dome on it. They have to reassure the irate neighbors that it's a Christian building, and they've even put up a ridiculous sign that, quite ironically, exemplifies the depth of argumentation that Christians generally employ to defend their faith: 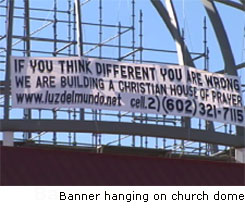 Obviously I wish that this dome-shaped building were an observatory, which would contribute a hell of a lot more to society than yet another tax-exempt house of dogma.