Earth: the privileged planet, and the lottery fallacy

- November 19, 2010
Here's an old canard you may have heard which tries to support the existence of God:


Have you ever noticed how perfectly suited Earth is for life? If we were only a tiny bit closer to the sun, the oceans would boil; if we were further away, Earth would be a lifeless rock of ice. Our proximity to the sun and even our axial tilt are "just right". We're even lucky enough to have Jupiter floating out there millions of miles away, as its immense gravity attracts asteroids that may otherwise pose a risk for Earth. Thanks to our nickel-iron core, we have a radiation shield that protects us from the deadly radiation emitted by the sun. The moon's effects on our tides and on the speed of the rotation of the Earth (the very early Earth had only a six hour day) have all contributed to the ability for life to form. Is this all just "random chance"? The probability of any one of these events seems absurd, much less all of them happening together. The probabilities are so absurd, in fact, that the only way to account for them is to infer that Earth and the solar system were designed. Right?

Consider for a moment the probability of you being born. A male living a normal human lifespan can produce over a quadrillion sperm in his lifetime, each carrying unique genetic information. Women are born with some 2 million eggs – also each with unique genetic information – only a few hundred of which will mature during her lifetime. For your mother and father to conceive you, they had to have an exact sperm coupled with an exact egg. If just one other sperm of the hundreds of millions of sperm your father ejaculated had fertilized your mother's egg, you would not be here. And all this of course is to ignore the incalculable circumstantial variables – that your mother and father met at all, and that they had intercourse at precisely the right time. Then you had nine months to develop – a time when many unborn children are lost to miscarriage. Not only that, but for you to be born, we have to extrapolate this scenario back through countless generations, so your parents could be born, their parents could be born, etc. Given all these factors, the a priori probability of you being born is astronomically low. But we don't think it's a miracle every time someone is born, because we know that asking the odds of you being born is a flawed and egocentric way of looking at it. Your parents weren't busy trying to conceive you. Assuming they were actually trying, they were trying to conceive a child. Instead of trying to assess the incalculable odds that you specifically were born, we ask the odds that a child will be born. We intuitively recognize that some order had to arise from all those random events. 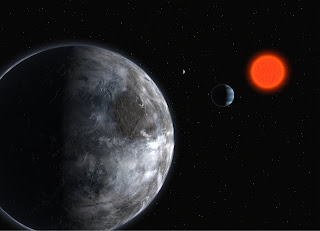 And so it is with our privileged planet and our solar system. It's a fallacy to ask what the a priori probability is of Earth, and humans, arising – because it presumes that nature was teleological, inevitably destined to produce us or nothing at all. But just as your parents need not have conceived you but could have conceived one of an incalculable number of other possible combinations of their genetic information, the universe need not have produce Earth or humans at all, but could have produce an incalculable number of other inhabitable worlds and species.

We now know that there are many other Earth-like planets just in our corner of the galactic neighborhood. Some are much larger (as big as Jupiter), while others are only slightly larger (there could be many the same size or smaller, but they're very hard to detect). We know that rather than requiring a precise distance from the sun and a precise size of the planet, habitable worlds can form within a range of parameters depending on their size, composition and distance from their star (not to mention, of course, the composition of their star – the planet Gliese 581g, for example, orbits very closely to its relatively cool red dwarf). Our galaxy alone may contain millions of habitable, Earth-like planets.

Any alien creatures that evolved on a planet like Gliese 581g would look very different from anything we've seen on Earth. Yet whether they were a lowly bacteria or a highly intelligent space alien, they would find that the conditions of their world happened to be "just right" for them to evolve. Of course they were. If the conditions weren't just right for them, they wouldn't exist! But the universe does not require them to exist – they are just one of many possible species, just as your parents could just as easily have had a different child or none at all. It's times like this when I like to pull out a favorite Carl Sagan quote of mine: "If we long to believe that the stars rise and set for us, that we are the reason there is a universe, does science do a disservice in deflating our conceits?" Besides, you have to wonder why God would bother with Jupiter... couldn't he just get rid of the asteroids?
Logic Science