How close are we to a Theory of Everything?

- November 21, 2010
Stephen Hawking's latest book The Grand Design certain gives the impression that we're mighty close to having it all figured out when he says on the last page, "M-Theory is the unified theory Einstein was looking for. The fact that we human beings – who are ourselves mere collections of fundamental particles of nature – have been able to come this close to an understanding of the laws governing us and our universe is a great triumph."

Of course, if you've read Hawking's book, he thinks that we may never have a single "Theory of Everything", but instead may have something closer to the current incarnation of M-Theory, which unifies the five variants of string theory in a sort of overlapping network. So what is a "theory of everything" or "unified theory", and how close are we to having one? 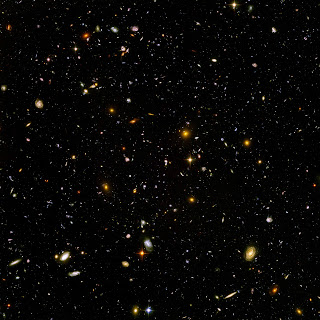 In case you're unfamiliar with the big problem facing physicists, here's a little background, put into as simple language as I know how. Classical physics – namely, Einsteins theories of relativity (and, on more everyday scales, Newtonian physics) – works very well for large-scale objects like stars, planets, and galaxies. It even tells us a great deal about the universe itself. Conversely, quantum mechanics tells us a great deal about small-scale objects: subatomic particles and the fundamental building blocks of our universe. But there's a problem. At subatomic scales, gravity is so weak that it's simply left out of the equations. Quantum gravity does not become strong until we reach the unfathomably small Plack scale, or 1.616 x 10-35, which is far too small for even our most powerful instruments to probe. If we simply try to combine the equations of general relativity with quantum mechanics, we get all kinds of absurd answers to the equations. So there's a big hole in our understanding of the universe, because we know that gravity must have played an important role in the formation of the universe. This is especially true because calculations have showed that in the Planck universe, the four forces of nature – the gravitational, electromagnetic, and strong and weak nuclear forces – would be unified as a single force. But unless we have a theory that unifies quantum mechanics and general relativity – also called a theory of quantum gravity – there is much that we will be simply unable to comprehend. A "theory of everything" would be just such a theory, preferably stating the fundamental laws of the universe in a relatively simple equation.

There is really only one major candidate for a theory of quantum gravity, and that is string theory. Essentially, string theory holds that the fundamental building blocks of matter, like quarks, are not "points", but are actually tiny little vibrating filaments, called strings. These strings can vibrate with different frequencies, and it is the different frequencies that give us different fundamental particles. String theory brings with it some unusual concepts, the most notable of which is that the math doesn't work in a three-dimensional universe. Instead, string theory postulates nine spatial dimensions, plus the tenth dimension of time. We don't experience these dimensions because they are extraordinarily small. A string can be warped up in these different dimensions, which can affect their frequencies. This allows string theory to beautifully predict all known particles, as well as predicting new kinds of particles such as supersymmetric particles.

In the 1990s, string theorists were perplexed by a major problem: there didn't seem to be just one version of string theory; in fact, there were five. But further mathematical research reveal that each of these five theories overlapped and described the same phenomena in different ways. The unification of these five forms of string theory is called M-theory, and it's the closest thing we have to a theory of everything. M-theory brings with it some big new ideas – two-dimensional membranes, nine-dimensional p-branes, parallel universes, and a tenth spatial dimension for a total (including time) of 11 dimensions.

M-theory makes use of something called perturbation. This means that the equations are so complex that no one has been able to figure out the answers, so the answers are approximations. But it gets worse. In M-theory, many of the equations themselves are approximations. This means that, as a mathematical model, M-theory is still very much a work in progress. Until it is complete, it's virtually impossible for string theorist to make falsifiable predictions from the theory. For example, I mentioned that string theory predicts supersymmetry. While this is true, and string theory is the only theory in which supersymmetry is integral, supersymmetry could still exist in nature even if string theory is not true. So even if, as some speculate we will, we will find evidence of supersymmetry with the Large Hadron Collider at CERN, it will not prove the theory true. Similarly, the LHC will very likely be able to confirm the existence of extra spatial dimensions, but this again will not prove string theory correct – extra dimensions are integral to string theory, but like supersymmetry, extra dimensions could exist even if string theory is wrong.

Recently, some intrepid researchers declared that they may be able to test string theory using something called qubits, or quantum bits. A qubit is like a computer bit, but while a classical bit is either 1 or 0, a qubit can be 1, 0, or a superposition of both (superposition refers to a particle's strange ability to occupy all possible states simultaneously). Unfortunately, some foremost experts – including string theorists – do not think this test will do much to substantiate string theory, but that the usefulness of its mathematics may be a mere coincidence.

Ultimately, we shouldn't get too excited about a "theory of everything" being on the horizon. M-theory isn't a complete theory, and until it's finished it's more of a promising idea than anything else. However, I don't think pessimism is warranted either. The discovery of extra dimensions and supersymmetry, while not being adequate to prove M-theory correct, would be very big steps in showing that it is on the right track. Right now, M-theory is the only model of physics which fully requires and accounts for these phenomena. Not only that, but M-theory truly is the only real candidate we have for a unified theory – one which, despite making incredible and bizarre new predictions, elegantly accounts for everything we already know. The next few years at the LHC are going to be a very exciting time for physicists and armchair nerds alike, but we shouldn't get ahead of ourselves. We're not quite there yet.
Science