The problem with Heaven

- November 29, 2010
My fellow apostate blogger Tristan Vick of Advocatus Atheist recently did a provocative piece on the problem with Hell. He essentially argued that no matter how you try to rationalize Hell, it is inherently in conflict with the concept of a loving God. I agree with Tristan that the concept of Hell is untenable, and paradoxical in the context of Christian theology. But I'm just as interested in the concept of Heaven, which in my estimate is every bit as untenable as the concept of Hell – just for different reasons. 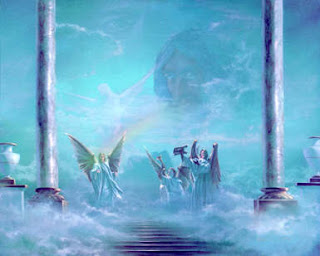 In Christian theology, Heaven is what brings God's plan of humankind's redemption to completion. In the beginning, God created Adam and Eve in his image, and they were like him – perfect, without sin. But they ate from the forbidden tree, rebelling against God, and God cast them out of Eden and condemned mankind to the sinful desires of the flesh. But God loved his creation, and wanted to redeem them. He created a system of ritual animal sacrifices, in which a high priest killed an animal (usually a lamb) in a holy temple, and the blood of the animal was atonement for humanity's sins. But the covenant was imperfect, because an animal had no capacity for good or evil, and no human was without sin. So God promised a messiah that would bring a new covenant. And sure enough, the messiah came. The messiah was God himself in human form. He died on a cross, acting as both the high priest and as the perfect lamb. And while a high priest was required to remain standing to show his work was never done, Jesus rose from the dead and sat at the right hand of God, indicating his work was finished. Now people could be saved simply by believing in Him. Lambs everywhere breathed a sigh of relief. But that's not the end. God will come back, destroy the world and send sinners to Hell. He'll create a new Earth and a new Heaven, where the saved souls will reside in peace forever, being returned to their sinless, perfect state – just as Adam and Eve were before the Fall.

In case you think I made any of that up, I simply suggest you read the book of Hebrews, and peruse the book of Revelation. It's all in there. Let's ignore some oddities for now, like...
I'm more interested in a third incongruity in Christian theology:
Adam and Eve had free will. According to Christian theology, all humans have sinned willfully. God has gone through quite a complicated process to redeem humanity. First he wiped out the world with a flood, and created a covenant with Noah. When that didn't work, he created a covenant with Moses. When that didn't work, he created one with himself. But he's still not done! It's not over until he comes back in the clouds, riding a donkey (or, in the modern interpretation, flying an F-22), sends the bad people away and remakes everything in what will surely be the greatest do-over of all time.

But if humans still have free will in the new Heaven, then there's no reason why they couldn't simply rebel again, starting the whole process over and soiling the new Earth with their newfound sinfulness.

Perhaps God would keep them from having the knowledge of good and evil, thus they would have no capability of sinning. But that is not free will; humans would be no more good or evil than the lambs they killed on holy altars. They'd be mindless servants, barely recognizable as human souls at all.

Perhaps they would be so enraptured by God's majesty and grace that they would never fathom rebelling. But this too is not free will; we'd be clouded as if drugged by God's spirit. The problem is the same: God would have to keep us distracted and blissfully unaware so that we wouldn't contemplate rebelling.

But there's another problem with Heaven:
If we spent eternity knowing that those we loved most on Earth were suffering horribly, would we not also be in great anguish? Would we not beg and plead for God to redeem them? Perhaps God would simply erase our memories of those friends and loved ones, and we'd be none the wiser. But this is the same pattern as above: the only way for Heaven to be bliss is for its inhabitants to be irrevocably ignorant. When we are ignorant, we cannot choose, and when we cannot choose, we are not free.

Deepak Chopra said something very provocative in his interview on The Colbert Report. He said that Hell is more interesting than Heaven, that  "If you were in Heaven, you'd be doomed to eternal senility.... there's no creative impulse in the absence of discontent." He's right. The only way for Heaven to work is if humans are unthinking, unfeeling, and unaware. I'd certainly rather burn and keep my wits about me than persist eternally in blissful ignorance. Christianity's Heaven sounds a lot like hell to me.
Christianity