- November 20, 2010
I'm a little late on this review, I know. The book came out in 2008, and attempted to quell the doubts of believers that may have been raised by the wild success of Richard Dawkins' The God Delusion as well as Sam Harris' The End of Faith and Christopher Hitchens' God Is Not Great. Keller's book is one of the few post-new-atheist apologetics books that isn't just a flea, like Alister McGrath's The Dawkins Delusion or Ravi Zacharias' unintentionally aptly-titled The End of Reason. Christians often accuse us atheists of only responding to the crackpot fundie type Christians (I know John Loftus gets that one a lot), but short of doing an in-depth response to the Blackwell Companion to Natural Theology (assuming you're a Christian who subscribes to natural theology), Keller's Christianity is about as sophisticated as you're going to get. It's thoughtful theology targeted at everyday people who don't have PhDs in philosophy. He's very much a student of C.S. Lewis, and reveals as much throughout the book both in selected Lewis quotes and in his general argumentative style. I think this book is as valid a contemporary view of Christianity as Francis Collins' The Language of God, which I've also reviewed.

I'm not going to review the book chapter by chapter, because that would take ages. Instead, I'm going to address what I feel are the most relevant concepts of the book. In many cases, I've already spent considerable space in this blog addressing the arguments so instead of rehashing my arguments, I'll just embed links to the relevant posts. Some chapters, like "Christianity Is a Straightjacket," aren't worth the time because they are clearly aimed at doubting believers – I'm not interested in whether Christianity is confining or liberating, depressing or uplifting; I'm interested in whether it is true. 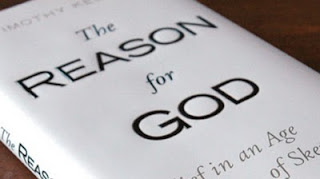 I'm going to jump around a bit in this review, heading to chapter 6 here at the beginning. Right off the bat, just perusing the chapters, I knew I was in for some bad argumentation. Chapter 6 is called "Science Has Disproved Christianity", which immediately induced an impulsive face-palming. My parents' church also recently did a sermon series in which one of the sermons was entitled, "Hasn't Science Disproved Religion?" Let's get something straight: there is not an atheist on the planet who thinks that science has disproved Christianity, or any other religion for that matter*. There are an infinite number of things that cannot be disproved. No one can disprove the claims that Jesus died on the cross, that he rose from the dead and ascended to Heaven, or that he performed miracles. Similarly, no one can disprove the claim that Muhammad was the prophet of Allah, that Buddha achieved transcendence, or that your neighbor was visited by aliens last night.

This has never been better summed up than it was by actor, comedian and atheist Ricky Gervais:


It annoys me that the burden of proof is on us. It should be: "You came up with the idea. Why do you believe it?" I could tell you I've got superpowers. But I can't go up to people saying "Prove I can't fly." They'd go: "What do you mean 'Prove you can't fly?' Prove you can!"

We don't need to "disprove" the factual claims of Christianity to dismiss it, and we certainly don't need science to disprove it. What we can do, however, is use science to make God superfluous and therefor obsolete. Evolution is a perfect example. There are some believers, not the least of whom is the aforementioned Francis Collins, who describe themselves as "theistic evolutionists". They believe that God, somehow or other, had a hand in evolution. Maybe he designed the process, or he guided it so humans would evolve (the exact nature of God's involvement varies from one believer to the next). That's fine, except for one problem: it's unnecessary, and it doesn't add anything to our understanding of evolution. Evolution can be understood solely by natural processes. At no point, from the earliest single-cell organisms all the way to the rich tapestry of life we now observe, is a supernatural intervention in any way necessary to explain any element of the theory.

Similarly, we can punt God out of the picture in cosmology, since the laws of physics do not require the universe to have had a beginning, negating the need for a creator [1], [2]. We can punt God out of the picture of morality, because we can build a sound understanding of morality based on evolution, cognitive psychology and sociology [3]. Most Christians have already punted God out of the picture with regard to many other things – most don't consider natural disasters to be the wrath of God, nor do too many people hold on to the belief that illness is caused by demons instead of microorganisms. Science doesn't have to "disprove" God, because as I often say, the only thing worse than a God that doesn't exist is a God that might as well not exist.

But I digress. Keller's central argument in this chapter is at its core a familiar retread of the NOMA argument, or "non-overlapping magisteria" concept coined by Stephen Gould: that science and religion fundamentally occupy different domains of inquiry: "There is no necessary disjunction between science and devout faith," Keller states [p.92]. Of course this is nonsense, because even liberal-minded theologians make factual claims about the nature of reality and derive meaning from it. I reject the notion that meaning can be derived independently of facts. Christianity requires God to be the creator of the universe, for God to be our moral compass, for God to have created each of us with purpose instead of having evolved and been conceived by chance. But if science can show us that the universe needs no creator, that morality can be understood through our biology, and that evolution can be accounted for solely by natural processes, then what place is left for God? What meaning can possibly be derived from such an inert being?

Besides, Keller's rationale begs the question often posed to theists: what is the methodology for discerning true spiritual claims from false ones? Even if science can't answer a question, that doesn't mean religion can. It's not enough to claim, "Science can't, therefor religion does."  That's just an argument from ignorance. Religion needs some kind of way to reliably confirm truth claims while discarding erroneous information. Of course, it doesn't; religion is, as Sam Harris famously said, a failed science.

Thankfully, aside from a vague allusion to God guiding evolution and stating that he rejects evolution as an "All-encompassing Theory" [p.94] (whatever that means), Keller refrains from taking a firm position on science's intersection with Christianity, suggesting instead that it's the central claims of Christian theology – Christ's ministry, death and ressurrection – that should be most important. Accordingly, in part 2 I'll dive into the chapters related to Christian theology – his answers for why we suffer, why Christian theology is relevant, and how we know the Bible is reliable.


*I realize that statement is hyperbolic, as there are probably some atheists who think science has disproved religion. But that is not the view held by any of the prominent "new atheists" today, including Dawkins, Hitchens, Harris, Dennett, Coyne, and Myers, nor is it a view I've ever encountered in any of the countless atheist books, blogs, and videos I've seen over the years.
Apologists Christianity Tim Keller