Department of "I swear I am not making this up" 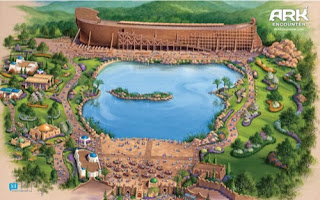 The infamous bastion of pseudoscience colloquially known as Ken Ham's Creation Museum in Kentucky is preparing to build a tourist attraction to end all tourist attractions – a full-sized replica of Noah's Ark. Supposedly it will be finished by 2014, though I'm skeptical whether it will, true to Biblical mythology, be built with a skeleton crew and wooden pegs. Over at their website, they're trying to raise $24 million to build the eyesore, and they're even trying to use loopholes in Kentucky tax law to get a break on it. Fortunately they've barely made a dent in their required funding.

Perhaps most annoyingly, they're trying to claim that the tax break shouldn't be subject to that pesky separation of church and state thing, because what they're doing is "scientific" rather than explicitly religious. For the sake of both science and aesthetics, I can only hope that their odds of being able to fund this thing are about the same odds that the story is true, in which case there is no chance it will ever see the light of day.
Christianity