Ted Williams and the power of prayer

- January 07, 2011
Unless you've been living under a rock, you've probably heard about Ted Williams, the "Man with the Golden Voice." A week ago he was living on the streets, where he'd been after alcohol and drunks took him in a downward spiral for many years. His unique pipes were captured on a Youtube video, which became a viral sensation. Now there are job offers pouring in for all kinds of broadcast work. He finally has the chance to turn his life around – quite dramatically in fact, as some of the job offers stand to be very lucrative.

Williams has been adamant about his relationship with God and the power of prayer. In various interviews he's talked about how he "found God" this past year and has prayed daily for better fortunes. In the dramatic reunion with his mother, she says she always prayed for him. 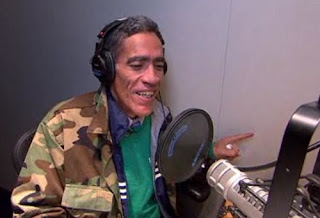 I'm sure that more than a few believers have used this as an opportunity to extol the power of prayer. But it's actually a fantastic example of how belief in prayer functions as a consequence of confirmation bias. This simply means that when people are looking for evidence that prayer works, they selectively disregard information that is contradictory to their assumptions. This is  what people do when they are duped by fortune tellers and psychics – they remember the hits, but disregard the many misses.

So let's consider a few things. Firstly, it's probably highly unlikely that Ted Williams is the only homeless man who has ever prayed for a second chance. Los Angeles alone has over 70,000 homeless people – how many of them pray every day? And of all those who pray, it's likely that many will die alone on the streets, never given a second chance.

When prayers aren't answered, believers are quick to rationalize it in order to placate any cognitive dissonance that arises:
The "no" or "wait" options can be demonstrated as a post-hoc rationalization simply by substituting anything else – preferably something silly to really drive the point home – for God. Let's say homeless people are praying to a piece of cake. Those who die cold and alone, well, the cake said "no". Those who see year after year pass by in fading hope, the cake is asking them to wait. And for the occasional Ted Williams, the cake said yes! But the cake is the boss, and whether you strike it rich, waste away year after year or die alone on the streets, "thy cake's will be done."

George Carlin famously mocked the folly of the "it's just God's will" excuse by rhetorically asking that if God's just going to do his will anyway, what's the point in praying at all? God has a divine plan, right? God is perfect, and so is his Big Plan! Then little old you comes along hoping for better fortune, and ask God to alter his perfect divine plan just a little bit for you.

Any time prayer has been studied using any kind of scientific parameters, it's failed to show any effect. And there isn't even any statistical evidence that people who pray are more likely to live longer, healthier or happier lives.

I wish Ted Williams the best. There are lots of people deserving of a second chance, and it's great that he got one. He's perfectly welcome to bask in the comforting delusion that God answered his prayers. But what really happened wasn't miraculous at all – just damned lucky. His story is really a celebration of humanity's goodwill, which is easy to lose site of sometimes.