A fate worse than death?

- March 10, 2011
Jeremiah Mitchell is an 8-year-old boy here in my home state of Oklahoma who contracted meningitis. Last year, an outbreak of meningitis killed two children and hospitalized five others. But this isn't one of my rants about the evils of the anti-vaccine movement, although there is a vaccine for meningitis.

Jeremiah's odds of survival were very low, but his parents opted to leap for the surgery. It succeeded, but at a great cost: all four of his limbs were amputated, along with part of his face. He has many more surgeries to come, years of rehabilitation, and will almost certainly require assisted living for the rest of his life. He'll have extraordinary difficulty relating to his peers, dating, getting married, or raising a family.

I'm not about to suggest that his parents were wrong to save him. But I wonder what I would do if I were a parent in that situation. Would I fight for my child's life, no matter the cost? Or would I recognize that to save his life would condemn him to a life of extraordinary hardship, and let him go? I believe that quality of life is more valuable than quantity of life; I support assisted suicide, and do not for a minute believe that life should be prolonged through artificial means. There's a big difference between living and merely existing. But at the same time, I also recognize that many people have led extraordinary lives despite crippling disabilities. Who would I be to deny my child the chance to do just that? 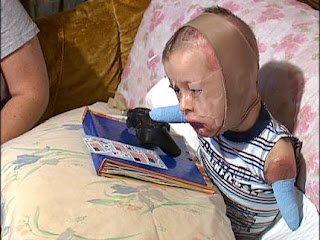