The human longing for God (part 1)

- March 20, 2011
There's a highly underrated book in the atheist arsenal, so to speak, that flew under the radars of most readers – primarily, I suspect, because it is not a polemic in the vein of The End of Faith or The God Delusion. It's called Religion Explained, by the anthropologist Pascal Boyer. He discusses religion through the lenses of evolution and cognitive psychology, explaining not only why religious beliefs are ubiquitous but why they tend to take the particular forms that they do.

I bring this up because I was just visiting the site of fellow godless liberal Michael Hawkins, where he's posted an interview with Richard Dawkins from the Christian show "Revelation TV". The interviewer challenges Dawkins to explain why so many billions of people seem to have an innate sense of God's existence. I've seen this concept posed a myriad of other ways by countless other people of faith, so much so that I'm convinced it's one of the central arguments for the existence of God: the old everybody's doing it argument.

Unfortunately, I found Dawkins' answer lacking. He suggests that people seek belief in God out of comfort – it helps them feel safe, helps them make sense of the world, etc. etc. Dawkins has often stated (correctly) that just because something is comforting doesn't mean it's true, and it seems like he was setting himself up to deliver that zinger. 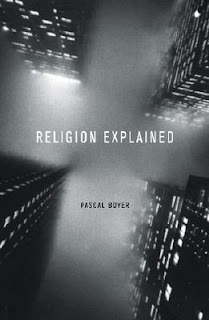 But the answer is much more interesting than that, and it's here I will pull concepts from Boyer's book. Consider that there are cultures in which people perform elaborate rituals of witchcraft to protect themselves from evil spirits from which they believe themselves to be constantly under threat. This is not much different than the "spiritual warfare" attitude of many Pentecostal-style Christians, who are constantly fending off demons and performing exorcisms. Add to this beliefs about the end times, the wrath and vengefulness of God, and the pervasive guilt deeply woven into many forms of Western religions. But there are many other cultures and subcultures in which people do not busy themselves with such things – they give no mind to perceived threats from evil spirits, they do not fear angry deities, and they do not wrack themselves with guilt over their everyday behavior. As Boyer says, "If religion allays anxiety, it cures only a small part of the disease it creates." [p.20] Comfort, then, is not an adequate explanation for the existence of religious beliefs.

If it were true that humans possess an innate "longing for God", we might expect to see a great deal more homogeneity in religious beliefs and practices than we do now, because the very concept of "God" is one that lacks any sort of ubiquitously accepted definition. The Western concept of God as an extrinsic creator is certainly not shared by much of the rest of the world – many cultures believe the universe is eternal, and view their gods as powerful players on its stage; others still do not even bother themselves with gods at all, and instead worship ancestral spirits or anthropomorphized forces of nature. We must also consider that while humans have walked the earth for some 200,000 years, Western concepts of monotheism have only arisen within the last few thousand years – even the Old Testament is full of stories of divine rivalries between Yahweh and weaker or more evil gods.

Further, when most modern theologians talk about a "longing for God" or some such thing, they tend to be talking about something that resembles an interpersonal relationship – something that brings the believer a sense of purpose and connection to things greater than themselves. However, this is a relatively recent development in religious practice, even among the great Western monotheisms. For most of religion's history, belief in gods lent itself to more localized explanations of phenomena. People have not been particularly concerned with the kinds of questions that theologians busy themselves with now – why is there a universe, for example – but rather more immediate concerns, like why is there a drought, why has my child fallen ill, or why did the storm destroy my village. And as we can see from the elaborate rituals of witchcraft and ancestor worship, religion has produced contorted, elaborate explanations and solutions to these dilemmas. The function of religion, then, has been and still often is nothing like the new-age influenced "relationship, not religion" ideology growing in abundance today – likely, I suspect, because our modern wealth, affluence and scientific knowledge has freed us from the kinds of concerns that plague more materially and educationally impoverished cultures.

It might be more accurate, then, to say that people have a predisposition for a broad array of supernatural beliefs rather than suggesting that they long to be "one with God" or "one with the universe". So why do we have such a predisposition and, more importantly, why do our beliefs tend to take the forms that they do?