- April 08, 2011
I'm watching the Harris/Craig debate tonight, and I'm taking notes as I do so. Right now I'm mostly through Sam Harris' opening remarks and, while I'm more than satisfied with his performance, I took notes on Craig's position and want to offer my own take on the dilemmas created by his arguments.

Craig's entire thesis can be summed up in a familiar argument, which he articulates toward the end of his opening statement:

So let's examine the foundation for this claim. Craig claims that God's own nature is the embodiment of good:


God's own holy and loving nature provides the absolute standard against which all actions are measured. He is by nature loving, generous, kind, and so forth.


This begs a question: are qualities such as kindness, generosity and lovingness good because God has them, or is God good because he has those qualities? Craig seems to think it is both; the circularity of such reasoning should be obvious.

Craig subsequently proposes that God's nature is manifested in his divine commands, which we have a moral duty to obey:


God's moral nature is expressed in relation to us in the form of divine commandments which constitute our moral duties or obligations. Far from being arbitrary, God's commandments must be consistent with his holy and loving nature. 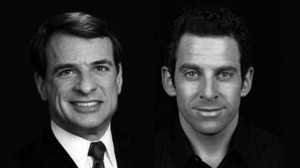 Craig claims that God must issue commands consistent with his character. But what happens when God's commandments seem quite at odds with things like lovingness, kindness, generosity, etc.? In the Old Testament, God commands and condones – among many other atrocities – human sacrifice, genocide, the slaughter of pregnant women, the keeping and beating of slaves, the subjugation of women as sexual slaves, and the torturous stoning of a woman who is absent a hymen on her wedding night or who fails to scream for help loud enough whilst she is raped. By Craig's logic, because God commands and condones these things, they must be good. But if God's commands are indeed so capricious and counter-intuitive, how can we trust our intuitions to tell us what is good at all? How can we possibly rationalize genocide and human sacrifice as kind, loving or generous?

At this point, it's worth noting that Craig objects to Sam Harris' proposal that morality is concerned with what Harris refers to as "the well-being of conscious creatures" and "human flourishing". Craig suggests that while science might indeed be able to tell us what kinds of things improve our well-being and flourishing, it cannot tell us why we ought to be concerned with these things:


In particular, [science] cannot tell us that we have a moral obligation to take actions which are conducive to human flourishing.

However, Craig's appeal to God does not solve the dilemma; it only pushes it back a step. The notion that we have a moral obligation to comply with God's commands does not tell us why we ought to be concerned with such compliance. Just as Craig asks why it is good to value the well-being of conscious creatures, we can in turn as why it is good to value our duty to obey God.

The theist is ultimately forced to concede that we ought to obey God's commands because God has our best interests in mind; it is good to obey God because it is good for us. But wait! The notion that morality is fundamentally a utilitarian concept was precisely Craig's objection to sociobiology. After all, sociobiology suggests that we are, by nature, a bonded and interdependent species; we are each wholly dependent on one another for every aspect of our survival and well-being, thus none of us has the luxury of moral autonomy. We can still assert that moral values are necessary facts; but when answering the implied question Necessary for what?, we can simply say, "For our well-being and flourishing." – quite ironically, the exact same conclusion at which the theist will be forced to arrive.

Thus the God hypothesis, as usual, is superfluous and wholly unnecessary.

I'll have more thoughts this weekend after I finish watching the debate.