A movie and a book

- May 04, 2011
A great horror movie is one of my favorite things in the world, but I'm sure any film aficionado would agree that great horror movies are few and far between. The really good ones don't just make you jump; they get under your skin.

I've been watching a bunch of horror movies lately, with mixed results. Last night I watched the French film Frontiers, and I basically found it to be a pretty standard Texas Chainsaw Massacre kind of flick; I also watched Let Me In recently, which is a surprisingly excellent American adaptation of the Swedish flick Let the Right One In, which I liked a lot as well. I also watched about ten minutes worth of an indie haunted house movie called Dream Home, which is seriously the most terrible 10 minutes of film to which I've ever been subjected. Yes, even worse than The Human Centipede, which was way too stupid to be properly disturbing.

But no horror movie I've seen lately have I found as provocative and disturbing as another bloody French film called Martyrs. I watched it weeks ago, and some of the imagery and concepts are still etched in my mind – and it's sparked great interest in a new book which I have just ordered. 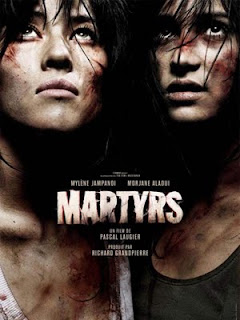 Lots of horror movies have blood and violence, but there's something about the violence in Martyrs that's different. We feel empathy with the characters; it's difficult not to imagine ourselves in their situation, and imagine what we might feel or do. But what's most terrifying about the movie is the utter indifference of the tormentors, who inflict unspeakable suffering on their captives. They don't laugh with maniacal glee or yell and scream like caricatures of the criminally insane; the violence is administered with cold and calculated precision, and it's the erosion of human empathy that is ultimately what makes the movie so disturbing.

Such atrocities have indeed happened in real life, and few examples are as notorious as the Nazi experiments on the Jews. I'll refrain from reciting examples, as they are easily referenced; rather, it's raised an interested question: how can people treat other human beings so coldly?

Religious "explanations", which as usual are no explanations at all, generally have something to do with some conjectural nonsense about "sin", "the flesh", our "animalistic nature", or even temptation from that famous minor deity with the pitchfork. But fortunately, with morality becoming a hot topic in science, someone has decided to tackle the topic.

Simon Baron-Cohen (no relation to the Borat guy, as far as I know) is professor of Developmental Psychopathology in the Departments of Psychiatry and Experimental Psychology at the University of Cambridge [1], whose primary focus has been Autism. But here he tackles a contentious and fascinating subject: the erosion of empathy in human behavior. From the preview (via Amazon, p.6): 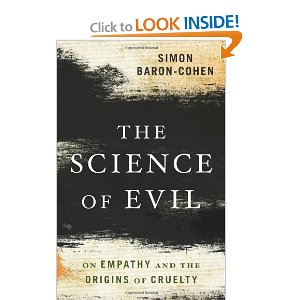 [When] we hold up the concept of evil to examine it, it is no explanation at all. For a scientist this is, of course, wholly inadequate. What the Nazis (and others like them) did was unimaginably terrible. But that doesn't mean we should simply shut down the inquiry into how people are capable of behaving in such ways or use a nonexplanation, such as saying people are simply evil.

This should make a nice companion to the books I've read by Frans De Waal, who is also concerned with empathy. But while De Waal is concerned with the evolutionary origins of empathy and how it shapes our altruistic behavior, Baron-Cohen is concerned with how that fundamental trait might be eroded. Most reasonably educated individuals are likely aware of sociopathology, in which a person's brain simply lacks proper functioning in the areas that are normally responsible for our feelings of empathy. But surely not all of the Nazi officers who conducted such atrocities on the Jews were true, biologically disadvantaged sociopaths; such individuals make up a trivially small portion of the general population. So what else might cause empathy to erode in otherwise normal, mentally healthy individuals?

Clearly the fact that we find such erosion of empathy plausible is why a movie like Martyrs is so difficult to watch. But it's a fascinating subject, and one I hope to learn much more about. Unfortunately (or fortunately, as the case may be) I am still working through Dan Dennett's beastly and provocative tome Darwin's Dangerous Idea, so it might be a while before I can give Baron-Cohen's book its due. But when I do, I'll be sure to post my thoughts here.
Culture Morality Science