Showing posts from June, 2011
Show all

- June 30, 2011
I've spent plenty of time in this blog going over various philosophical arguments for the existence of a god or gods, as well as talking about the historical and logical problems of religion. Quite honestly I feel like everything that needs to be said, I've said. I'm not going to devote yet another post to talking about William Lane Craig's idiotic Kalam argument, or arguing that the Bible is a lousy historical document. At this point, curious readers can just browse the archives. It's been done to death. I say this because while that kind of stuff can be rehashed ad nauseum , I think there's another way of looking at religion to demonstrate that it's false –and that is simply to look at what theists actually believe, and how they rationalize it. Over at Jerry Coyne's Why Evolution Is True blog, a guest poster has rigorously dissected a Pew survey of American evangelicals. Being an evolutionary biologist, Jerry Coyne seemed most interested in the s
Post a Comment
Read more...

That whole pesky free will thing

- June 27, 2011
I admit I'm not the most well-read on the subject of free will, although that's something I'm trying to remedy. I've read Sam Harris ' recent musings on it, Jerry Coyne 's been talking about it, and I'm most familiar with Dan Dennett's extensive discussions of it. I have to confess that I find the debate about free will somewhat tiresome because for all intents and purposes, we have free will. Asking whether free will is illusory is kind of like asking whether our universe is merely a projection of our own consciousness – it's a topic that might interest philosophers, but pragmatically it's a non-starter. Even if it could be proved that free will is illusory, we'd still have to live as though it wasn't. But I think it's worth talking about what exactly we mean when we use the term "free will", and discussing implications of new advances in neuroscience that help us understand how we make our choices.
Post a Comment
Read more...

Why don't people believe in unicorns? 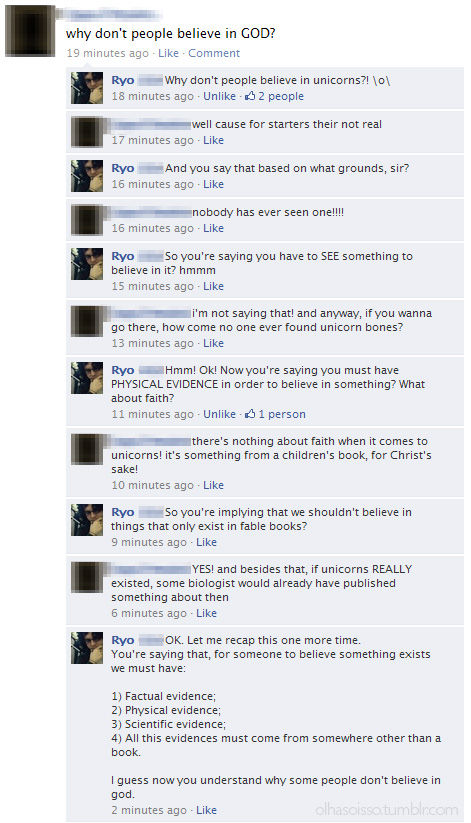 - June 23, 2011
I have a couple of more in-depth posts on the way, but in the meantime I've been watching YouTube user TheraminTrees' new video series "There Are No Gods", of which two of three parts have been released. He's essentially tackling the idea that deities are logically impossible beings, and as usual he's doing a damn fine job arguing it. One idea stuck out in particular that I think is worth revisiting: the omnipotence paradox. Y'know, the old questions like, in the words of Homer Simpson, "Could God microwave a burrito so hot that he couldn't eat it?" TheraminTrees asks a similar question: Can God destroy himself? The de facto theological answer is this: God is omnipotent, yes; but he cannot do things that are illogical or contrary to His nature. William Lane Craig, for example, in his recent debate with Sam Harris, argued that God cannot issue moral commands that are inconsistent with his loving, holy nature. Here's the problem thou
Post a Comment
Read more...

Michael Shermer on being wrong

- June 22, 2011
More Michael Shermer: Here he is on John Stossel's show (???) responding to an audience member's question: "What if you're wrong?" His answer rings true. What difference does it make whether I believe? Why is mere belief so important – moreso than how I live and treat others? And if mere belief is so important to God, why make the evidence so ambiguous? Why make the correct religion – and the correct interpretation of it – seem so arbitrary? Why make answered prayers indistinguishable from random improbable events, or make the religious texts full of scientific and historical errors – not to mention internal factual contradictions? Sorry, I'm ranting. There's simply no reason to believe an all-powerful deity would give a hoot whether someone   simply believed in its mere existence. Ho-hum.
Post a Comment
Read more...

Michio Kaku talks with Michael Shermer about "The Believing Brain"

- June 22, 2011
There's a great audio clip online of Michio Kaku interviewing Michael Shermer about his new book, The Believing Brain . They generally keep the topic in the realms of conspiracy theories, psychics, etc., but there's no reason this thought process can't be applied to religious beliefs as well, as Michael Shermer often does. It's only about 10 minutes long (and it cuts off) so I won't bother rehashing every detail, but here are some of my thoughts on a few of Shermer's points: We're evolved to make positive pattern-recognition errors, because making negative pattern-recognition errors is potentially detrimental to our survival – i.e., it's better to assume the movement in the brush is a predator and run than to assume it's the wind and get eaten. Science requires us to account for all available information – not just select that which is favorable to our preconceptions. Generally, we tend toward confirmation bias – selectively filtering informatio
Post a Comment
Read more...

I think the rise of Scientology is fascinating for the simple fact that most religions didn't evolve in our modern scientific age, and we can witness firsthand how people twist history into legend and adopt irrational beliefs. And, just like most others believers do, Scientologists like to sing songs about their nutty beliefs. The only difference between Scientology and more popular religions like Hinduism, Christianity, Islam, etc., is that Scientology hasn't been around long enough to be normalized in any culture to the point that it has stopped looking completely retarded to literally everyone who is not a Scientologist.
Post a Comment
Read more... 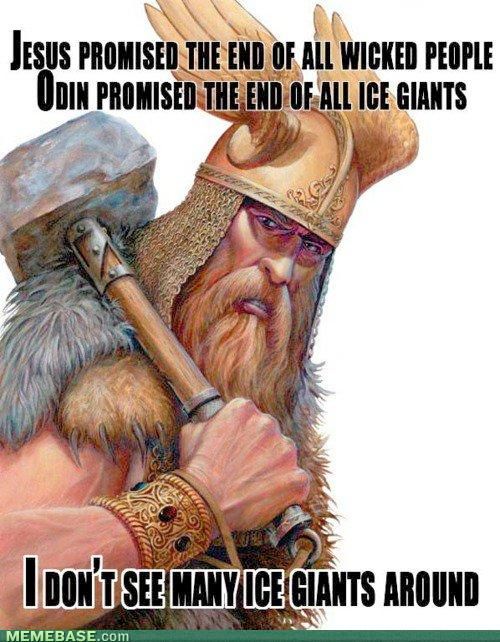 Hat tip to the esteemed Tristan Vick for getting me thinking about this topic today. I was in the mood for an adventure-y flick last night, and came close to watching Raiders of the Lost Ark . But then I found this old DVD of Master and Commander: The Far Side of the World that my parents had given me years ago, but I never watched. I really enjoyed the movie, but my favorite part was the character Stephen Maturin, who is more or less a fictional version of Charles Darwin around the time of the HMS Beagle. He's a naturalist who travels to the Galapagos Islands and discovers natural selection, and he's played by Paul Bettany, who played Darwin in the 2009 film Creation . There was a sense of wonder in him as he studied the animals, and that's a wonder which I can't help but feel is lost on creationists. And I mean both kinds of creationists – the really deluded young-earth ones, and the quasi-scientific intelligent design ones. Both kinds of creationists yank ou
Post a Comment
Read more...

It's been a marquee week for crazy Christians making headlines. Sometimes it's hard to believe that these people actually exist, but have faith – they do! First we have quasi-historian David Barton claiming that the Founding Fathers had been through the "entire" creation/evolution debate, and decided they wanted creationism taught in public schools. Quite an astounding fact considering a) public schools did not yet exist, and b) Darwin published On the Origin of Species in 1859 . A little bit of good news coming out of a tragic situation: Christian couple Timothy and Rebecca Wyland were convicted of criminal neglect after relying on prayer to magically heal a baseball-sized tumor on their daughters face. The really good news: their daughter is receiving proper medical care, and her condition is improving. Peter Popoff, the faith healer who was exposed as a fraud by James Randi on The Tonight Show with Johnny Carson , is back in business exploiting people for
Post a Comment
Read more...

Intelligent design apologists, BioLogos, and the attack of the facepalms

- June 07, 2011
Earlier today I subjected myself this video , which claims that a paper by some ID "researchers", like, totally proves that old pesky what's-his-face Oxford biologist guy, um, Darkins? Dawking? oh yeah, Richard Dawkins, has no idea what he's talking about. Why the maker of the video chose to focus on Richard Dawkins, I'm not really sure – probably just because he's a prominent biologist and atheist. Clearly those clods at Oxford don't know what they're talking about. Anyway, I couldn't help but be curious what "peer-reviewed paper" the author was referring to, so I looked it up. It was done by two authors for the Biologic Institute (the "research" arm of the Discovery Institute) who are a chemical engineer and a zoologist, and it was a paper presumably on genetics and molecular biology. That's the funny thing about the Discovery Institute – you don't find too many people who actually have the credentials to suggest the
Post a Comment
Read more...

"Atheist have better sex" study: I was wrong

- June 04, 2011
Sometimes, you just gotta 'fess up when you were off the mark. Recently, I re-posted a story that was going around in the news (and various atheist blogs) about a study which purportedly found that atheists had better sex than believers. Now, the protests of some (you know who you are) struck me as predictably reactionary. But the reality is that a lot has come to light about this test that more or less discredits it, the first of which is the author, Darrel Ray. I don't really care that he's the author of The God Virus . An atheist doing research on atheism (or anything else) is fine, as long as the methodology is sound. I was under the impression that he was psychologist at KU, and he was simply working with one of his undergraduates on the study, which would not be particularly unusual. However, while some news articles described this as a "KU Study", he's just an "independent researcher", not part of any university faculty, which means it
Post a Comment
Read more...

On Adam & Eve not existing, and the fundamental falsehood of Christianity

- June 04, 2011
Jerry Coyne has a great article up over at WEIT in which he discusses the theological implications of what is now an indisputable scientific fact: Adam & Eve are a work of fiction . There is simply no possible way that all of humanity descended from one pair of humans, although a few accommodationists over at BioLogos are trying their damnedest (and generally failing) to reconcile their theology with reality: Pastor Tim Keller, a participant in a BioLogos workshop on evolution and Adam and Eve held last November (!), says this: “[Paul] most definitely wanted to teach us that Adam and Eve were real historical figures. When you refuse to take a biblical author literally when he clearly wants you to do so, you have moved away from the traditional understanding of the biblical authority. . If Adam doesn’t exist, Paul’s whole argument—that both sin and grace work “covenantally’—falls apart. You can’t say that Paul was a ‘man of his time’ but we can accept his basic teachin
Post a Comment
Read more...

- June 04, 2011
I'd rather see it called something like "Freethinking Community of Tulsa", but this is pretty cool to see here in Tulsa.
Post a Comment
Read more...
More posts