- July 06, 2011
I'm starting to see an uprising of sorts; it seems like I wasn't alone in my sentiments in the last post, and I'm seeing more like-minded people speak up. But there are still some who insist that the guy was totally insensitive to the fact that she was in an enclosed space, and that his proposition was, like, obviously, a thinly veiled proposition for sex.

So, here's something important:

You do not know what the guy's intentions were.

Nobody does, and speculating about it is pointless. But let's imagine for a moment that it was an indirect sexual proposition. So the fuck what? Men and women both make sexual advances, because, y'know, sex is a big part of what we humans are about. As soon as Rebecca declined, that was the end of it. Nothing else to tell.

Now, if the argument is that men shouldn't ask for dates in enclosed spaces, I completely agree. If it's that even if his intentions are pure as an abstinence pledge, one's hotel room is too easily construed as a cheap ploy to coerce a girl into sex, then I also agree. But what if Rebecca had been totally hot for the guy? There are, in fact, many women who enjoy spontaneous sex with strangers and they have every right to do so.

But let's think about this for a moment: maybe the guy thought it was his only chance. Maybe his room was the only place he could think of to go at 4:00 a.m. She was getting on an elevator and he'd probably never see her again. One chance. Maybe he just wanted to talk and see where things went in a perfectly respectful, mutually considerate manner. Or maybe he was hoping to murder her, then rape and eat her corpse. It doesn't matter what his true motives were. What matters is that regardless of how ill-conceived and awkward his proposition was, it was not 1) lewd, 2) physical, 3,) coercive,  or 4) threatening, and as soon as she said no, he left her alone. And what I have a problem with is not the suggestion that guys shouldn't be considerate about when and how they ask for a date; what I have a problem with is the notion that an awkward proposal for a coffee date is equivalent to harassment or, in Rebecca's words, being "sexualized". That is not harassment, or "sexualization." That is a very bad attempt to get a date and maybe a one-nighter. It's time people quit villainizing a guy who's only crime was being socially awkward.

And one more thing:  you might find it odd that since 2006, Rebecca has been releasing Skeptchick calendars, which include photos like this: 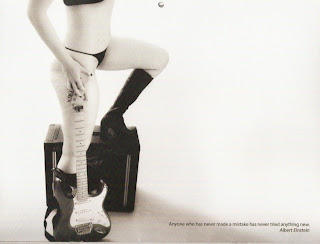 ... and which she herself has posed for. Now, I'm not saying there's anything wrong with that. Hell no! If women want to pose provocatively, more power to 'em. Just don't complain that you're being sexualized by a guy who asks for conversation and coffee when the allure of these calendars is obviously not anyone's intellect.
Women