More on the debt

- July 29, 2011
House republicans are pros at the fine art of reciting cliches, but they seem to expect Americans to have a short-term memory about how we actually accrued all this debt in the first place. Here's a handy visual aid, courtesy of Ezra Klein: 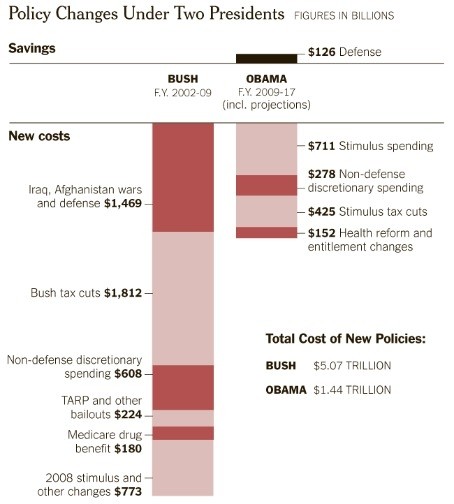 Another fun fact: over 80% of our current national debt was brought on by the last three republican administrations (Reagan, H.W. Bush, W. Bush). And look carefully at the graph above: the Bush tax cuts are the single greatest addition to our national debt. But the real problem is that Bush not only cut taxes, but did so in a time of war. That means spending was skyrocketing, but revenues were plummeting.

Here's the hard truth: Al Gore was right. Back in the 2000 elections, Al Gore argued that tax cuts were not wise – that we needed to continue to pay down the debt as we had been doing under Clinton. Bush argued that the surpluses were a sign that the government had too much money, and it needed to be given back to taxpayers. That might sound tempting on the surface, until you realize that the debt is a tax on all Americans.

And now, republicans are refusing to raise the debt ceiling on a debt for which their policies are primarily responsible. Worse, they want massive cuts in government programs that are there to help the poor – medicare, medicaid, and social security. What they won't tell you is that medicare and medicaid have already had reforms that reduce costs, courtesy of the Healthcare Reform Act. Social security will be able to pay 100% of its benefits through 2027 without any changes at all. So why won't republicans compromise on a debt deal?

It all goes back to the centerpiece of republican policy: taxes are evil. Taxes are always too high. We're at the lowest tax levels in over 50 years, and they're still too high. Even a 3% increase on 2% of the population, they tell us, will be devastating to the economy. I remember Bush's election and presidency, which exemplified the irrational nature of conservatives' attitude toward taxes. In 2000, he argued that tax cuts were needed because we had a surplus. We didn't need to worry about the debt back then, apparently. Then, in 2003, when neck-deep in two wars and running record deficits, he argued that we needed more tax cuts – to "stimulate the economy". So if we're doing great, tax cuts. If we're struggling, tax cuts. Taxes are always too high, so cutting them is always the answer.

And now it's to the point where the people in office are such staunch ideologues that many of them want the country to default, to force massive cuts in spending. It might leave millions of people – the poor, elderly and sick, in particular – unable to pay their bills, but hey, as long as those in the top 2% don't have to pay 3% more taxes, it's all just collateral damage to these clowns.
Politics