- July 03, 2011
There's an article I spied via RichardDawkins.net in which NIS Director Francis Collins claims that Richard Dawkins "admitted admitted to him during a conversation that the most troubling argument for nonbelievers to counter is the fine-tuning of the universe." Apparently hard to explain = Jesus, because Collins uses this as a springboard to recite the oft-debunked fine-tuning argument:


“If they (constants in the universe) were set at a value that was just a tiny bit different, one part in a billion, the whole thing wouldn’t work anymore,” said Collins, the director of the National Institutes of Health, during the 31st Annual Christian Scholars’ Conference at Pepperdine University in Malibu, Calif.

These constants regarding the behavior of matter and energy – such as strong and weak nuclear forces, gravity, and the speed of light – have to be precisely right during the Big Bang for life as we know it to exist.


Apparently Collins hasn't read Victor Stenger's The Fallacy of Fine-Tuning. For my part, I've addressed the argument on several occasions. It commits the lottery fallacy. It asserts that the precise physical constants which allow life are improbable, when we do not know if the physical constants could be different or, if they could, what their range is (important: you cannot calculate probability if you do not know the range!). It ignores the anthropic principle: obviously, the conditions are right for us to be here; but that doesn't prove that the conditions were designed for us to be here. The argument's a tautology.

But instead of beating a dead horse, I had another idea about design: the use of the word "design". What do we mean when we say something is designed? How can we tell the difference between things that are designed and things that aren't?

Consider two possibilities:
How could we know which was true? I think the most obvious way to start is by looking at designed things, and figure out what qualities they have that are telling of design. The old watchmaker argument from William Paley is a great example, the implication being that we can tell just by looking at something whether it is designed. So how do we know that a watch is designed? Suppose you were an alien being examining the relics of a long-extinct human civilization. You can examine the watch, and you have some photographs of people holding or wearing watches. Now, even an alien who'd never seen a watch could easily discern that its purpose is to tell time. It could be used for other things – say, as a projectile weapon – but it wouldn't make a very good projectile weapon.

Or, imagine you're looking at a car. People use cars for lots of things: for storing stuff; as a place to eat, sleep, or have sex; or even, in some circumstances, as a home. But cars are not usually very comfortable places to eat, sleep, or have sex. They can't store very much stuff, and the fact that they can move around means that stuff in the car can break. Clearly, cars are designed for transportation. It may have other novel uses, but it's not really ideal for those other uses – its purpose is first and foremost transportation. 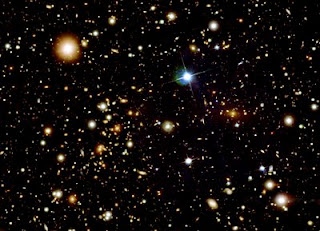 Thus we come to a defining principle of design: if something is designed to do something, it does that thing efficiently (unless it's just a lousy design), the way watches are very efficient at telling time and cars are very efficient at transportation. It may be able to do other things that it wasn't intended to do, but it generally won't be the best choice for doing those things because those aren't what it was primarily designed to do.

Now, let's go back to the idea that the universe was designed for life – intelligent life like ours in particular. Presumably, we should be able to tell just by looking at the universe whether it was designed for that purpose. The universe may have other purposes we're not aware of, but the theistic argument is always that it was designed with the existence of life as a primary purpose, if not the primary purpose. So, is the universe good at supporting life? Consider the following:
Any reasonable person must concede that if the universe is designed for life – particularly for intelligent life like us – then it's an astonishingly poor design. It's not only inefficient, it's counterproductive – since life, when it finally does emerge, must struggle to survive. If the universe were designed for us, then a Genesis-type cosmology is what we should expect: humans are created at the inception of all things, and the universe need not be any bigger or older than is required to support our existence. It certainly need not be inhospitable. Why would an all-knowing, omnipotent Creator design a universe that wastes so much space and time – and then, when life finally emerges in a microscopic corner of a galaxy filled with hundreds of billions of stars, make mere survival such a struggle? The believer has no answer. The reality is that the universe we observe is far more consistent with the idea that life is a "happy accident" – a rare byproduct of the laws of the universe rather than the purpose of them.
Fine-tuning Francis Collins Intelligent Design Philosophy