Objective morality does not exist (and nobody believes in it anyway)

- August 11, 2011
It's been parroted by just about every Christian theologian I've ever encountered (even the armchair kind): Without God, anything is permissible. God is the only source of objective moral law. If there is no God, then there is no objective morality, and no one can say with any authority or rational certainty that any given act is patently immoral.

So, why believe a "moral law" exists in the first place? For some reason, we want to be treated fairly. We want our autonomy respected. Even when we treat others unfairly, we usually still want to be treated fairly ourselves. There's some intuitive sense in us that constitutes what is right and wrong. If we're asked why it's wrong to indiscriminately kill and eat infants, our answer tends toward, It just is.  This intuitive understanding of moral behavior indicates that there exists an objective moral law to which we are subject. If such an objective moral law exists, it must come from a moral law giver whose authority is absolute and infallible – God.


I submit that what Christians really believe is actually just another form of subjective morality. Nobody really believes in ultimate moral absolutes.

William Lane Craig has recently defended, again, the Slaughter of the Canaanites[1]. In this charming Bible story, almighty God orders his holy army to mercilessly slaughter everyone in Canaan. God explicitly tells them to leave no one alive:


However, in the cities of the nations the LORD your God is giving you as an inheritance, do not leave alive anything that breathes.  Completely destroy them—the Hittites, Amorites, Canaanites, Perizzites, Hivites and Jebusites—as the LORD your God has commanded you. [Deut 20:16-17]

It should be noted that is one of many times God commands his righteous army to kill the shit out of everyone. In the judgement of Israel in the book of Ezekiel, God's instructions are even more explicit (emphasis mine):


Now the glory of the God of Israel went up from above the cherubim, where it had been, and moved to the threshold of the temple. Then the LORD called to the man clothed in linen who had the writing kit at his side and said to him, “Go throughout the city of Jerusalem and put a mark on the foreheads of those who grieve and lament over all the detestable things that are done in it.” As I listened, he said to the others, “Follow him through the city and kill, without showing pity or compassion. Slaughter the old men, the young men and women, the mothers and children, but do not touch anyone who has the mark. Begin at my sanctuary.” So they began with the old men who were in front of the temple.[Ezekiel 9:3-6]

Clearly, Yahweh does not mess around. But wait! Doesn't the idea of deliberately slaughtering children offend our moral sensibilities? Isn't this barbaric and... well, evil? Craig has a different explanation. First, he recounts his previous defense, which I have addressed on this blog [2]:


My argument in Question of the Week #16 is that God has the moral right to issue such commands and that He wronged no one in doing so.

Then he adds this juicy tidbit:


There is one important aspect of my answer that I would change, however. I have come to appreciate as a result of a closer reading of the biblical text that God’s command to Israel was not primarily to exterminate the Canaanites but to drive them out of the land.

It is therefore completely misleading to characterize God’s command to Israel as a command to commit genocide. Rather it was first and foremost a command to drive the tribes out of the land and to occupy it.

Well, I have two objections. The first is that it's not, y'know, true. The scripture explicitly tells them to destroy "anything that breathes". If that's not a command for genocide, well, I don't know what is. But the second problem is that it's sort of like saying that if a murderer entered your house and killed your family, it was your fault for not getting them out of there fast enough. It's blaming the victim.

I am, frankly, much more interested in what Craig said in his first response: that God was morally justified in ordering the genocide. Something tells me that if this weren't creating a little cognitive dissonance for Craig, he wouldn't have conjured up his charitable re-interpretation. It's hard to really, honestly think that killing innocent people en masse is a good thing. 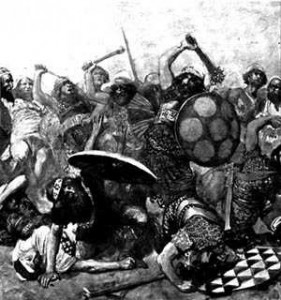 This raises a bigger issue: are horrible things okay if God commands them? The answer, according to Craig at least, is a resounding yes. However horrible we might find the indiscriminate slaughter of children, God had sufficient moral reason for doing so.


What makes something immoral?

But this creates a great conundrum for Christians: if any atrocity can be morally justified by God's command, then no act is absolutely wrong. What Craig is arguing is not that genocide is okay all the time, but that there was a mitigating circumstance in which it was the right thing to do. In other words, there is nothing about the act of murdering children that, in itself, is intrinsically wrong. Because if it were absolutely wrong, then even God would not be able to command it. Remember when William Lane Craig said this (emphasis mine):


God's moral nature is expressed in relation to us in the form of divine commandments which constitute our moral duties or obligations. Far from being arbitrary, God's commandments must be consistent with his holy and loving nature. [3]

If that second sentence is true, then God cannot command us to do something that is morally wrong; thus, the mass child killing must have been right, since that is what God commanded. But that erodes the entire concept of what "objective morality" is supposed to be. Presumably, there is a moral law which we all intuitively understand and to which we are all bound. Let's go back a moment, and listen to how C.S. Lewis describes moral law in Mere Christianity:
But if even killing children can, in certain circumstances, be considered an act of good, then what basis is there to assert "it is wrong to kill children" as an objective moral tenet?

Here's a more obvious example. Lying is forbidden in the Ten Commandments. But few of us would object to those who, in Nazi-occupied Poland, lied to authorities to protect the lives of Jewish people. In some circumstances, lying is the most compassionate thing to do. This means that lying cannot be objectively, absolutely wrong. There are circumstances in which we recognize it as not only permissible, but even morally obligatory. Lying is not absolutely wrong. Neither is taking someone's life. We can probably imagine any atrocity, no matter how disgusting and awful, and then imagine another circumstance in which it was the lesser of evils. That is precisely what Christians do when they are defending genocide commanded by God: they're arguing that, while not pretty, it was the best and most moral course of action.

This simply means that morality is subject to God's whims. The Christian is merely positing another form of subjective morality, in which no act is absolutely, fundamentally wrong; instead, the "rightness" of an act is contingent on whether God commands or condemns it. And, of course, God can change his tune; he can say, "thou shalt not kill", or he can say, "kill, without showing pity or compassion". Is killing objectively wrong? Is this an absolute moral law? If so, then God is evil to command it; if the act can be circumstantially good because God commanded it, it cannot intrinsically be objectively and absolutely wrong.

Subjective does not mean arbitrary

Christians who argue against a non-theistic ground for moral behavior, going all the way back to C.S. Lewis, are making a fundamental folly: they are conflating subjective with arbitrary. Morality is not objective. Even Christians, in practice, do not believe such a thing. We all experience moral impulses and moral reasoning subjectively. However, we have non-arbitrary reasons for adhering to norms of moral behavior. There are rational reasons for treating others fairly, for doing acts of goodwill, and even for sacrificing ourselves for the good of others. I won't tread on the subject here, as this post is already quite lengthy, but a fine primer can be found here.

The very notion of grounding morality in God's commands necessarily makes morality arbitrary. If even the indiscriminate killing of children as a part of a hostile military conquest can be viewed as circumstantially moral, then what act can't be circumstantially moral? Truly, with God, everything is permitted.