- September 11, 2011
I'm going to spare the whole spiel about how the 9.11 attacks changed everything, because I think that sort of thing tends to be greatly exaggerated. But I do want to reflect briefly on a relevant issue.

Terrorism and war is one of those fringes of the religious debate that arouses lots of ire from religious moderates who don't like to be associated with fundamentalist killers. Most Muslims are peaceful, normal people. The US is home to some two million of them, who unfortunately have had to endure being stigmatized by reactionary conservatives. Remember when they tried to build a community center in New York, perfectly within their legal jurisdiction? I sure do. 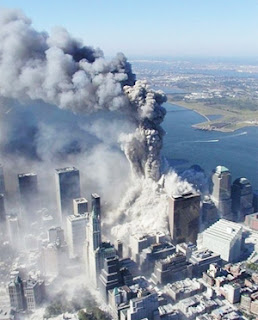 Anyway, here's the issue: the problem with fundamentalist Islam, as is the problem with all religion, is that it is based on a bunch of ridiculous ideas that are shielded from criticism precisely because they are religious in nature, and command some bizarre form of special privilege. It's still taboo to criticize people's religious beliefs, no matter how stupid they are. The problem is not that the 9.11 attackers picked the wrong religion, but that they subverted reason for ideological blindness and bought into a litany of false beliefs, which they believed with enough passion and conviction to become martyrs.

Non-believers often paint a picture that without religion, the world would be more peaceful. To an extent, I think that's accurate. The entire Israel/Palestine conflict is happening because two diametrically opposed religious sects each think that God gave them a certain plot of land. They feel entitled to it and they'll die for it. Well, sorry: there is no God and he's not a divine real estate agent. It's just land. The sooner those people accept that, the sooner they can quit killing each other. As Steven Weinberg has said, With or without religion, good people can behave well and bad people can do evil; but for good people to do evil — that takes religion.

But I also think that it can be easy to over-simplify. There are all kinds of false beliefs that a positivist society could purge including racism, sexism, nationalism, gender discrimination, and even dangerous pseudosciences like homeopathy and the anti-vaccination movement. Getting rid of religion would be a good step in eliminating some real cruelty, but it wouldn't turn the world into some secular utopia.

The erosion of religion is really just one stop along the way. Religion is, by far, the most prominent label by which we divide ourselves against each other. But what we are really after is not so much the elimination of religion, but the broader adoption of a rational, science-based understanding of the world in place of superstition and dogma.


One last point, unrelated. We love to lament at the 3,000 or so civilians lost in 9.11. But in our completely unnecessary invasion of Iraq, we have by most estimates been the cause of over 100,000 civilians deaths. Brings to mind the old saying, "One man's terrorist is another man's freedom fighter."