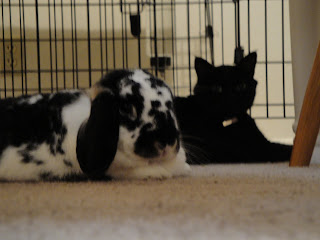 I'm back in town after a thoroughly debaucherous weekend in Las Vegas. It was a blast, of course. While I was gone, I had my 'rents swing by my place to check on Alexi, my cat. So upon returning home I swung by their place to pick up my key, and they informed me that the family bunny, Benji, had died while I was away. I'd just taken care of him for a couple weeks while the 'rents were out of state, and I loved having the rabbit and my cat bopping around my apartment together. It's a good memory of him to have now that he's gone. You'll be missed, Benji.

I should be returning to my usual quasi-regular blogging this week. In the meantime:

While in Vegas an old man who was raising money for a no-kill animal shelter thanked me for my small donation and handed me one of those novelty $1,000,000 bills. It wasn't until later that I saw the back: it was a track. It was basically the Ray Comfort pitch: Have you ever stolen? Then you're a thief. Ever lied? You're a liar. Do those things actually work on anyone? By that logic, I'm also a saint, given all the nice things I've done over the years. Anyway, the lesson being: you're not perfect, therefor you're going to hell. Eternal damnation for the crime of being human. Gotta love Christianity.

The rest of the track talked about how God sent his only son to pay my debt for me. Again... does that stuff work on people? Why does an omnipotent god have a son? Especially when he is his own son? Riddle me that! You're guilty of being born human, but God sacrificed himself to himself to pay for the debt he decided you owed him for a 'crime' over which you had no control. And if you telepathically confess your wrongdoings and claim him Lord, your eternal soul will go to paradise when you die. Really? Clearly the only reason we don't make fun of Christianity as much as, say, Scientology, is because we're more accustomed to it. 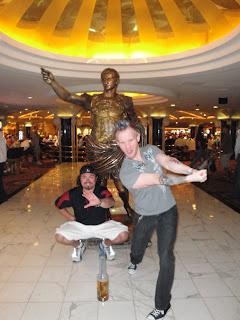