- October 16, 2011
I've blogged in the past about the evils of the Old Testament god [1, 2, 3], and I've talked about how modern Christians ignore what Jesus said. But my comrade Harry's comment on my recent post about the Imperialism of the Christian West got me thinking: there are plenty of things that God did that seem irrelevant, and many of his commandments that modern Christians ignore either because they're inconvenient or because they justify them as 'meant for the culture at the time' (i.e., they're inconvenient). But what about the things that the god of Christianity could have said – things he probably should have said – that he didn't bother mentioning?

Harry mentions in his blog that Jesus never condemned slavery. The god of the Bible never does. Kind of a big one, yes? Isn't it weird that Yahweh remembered to tell people to stone women who aren't virgins on their wedding night, and how Jesus reminded us that it's a sin to get divorced if someone didn't cheat, but nowhere in the Bible is it ever commanded, concisely and unambiguously, that all forms of slavery are wrong because people are not property. You'd think that, for the one book the omnibenevolent Lord of the Universe supposedly gave humanity and given how widespread and nasty slavery was in the Christian West, that God would have wanted to avert all that evildoing – particularly given that his own followers were a big part of the problem. Instead, God remembered to command his people not to make garments using both linen and wool (Leviticus 19:19). But owning people? Oops. 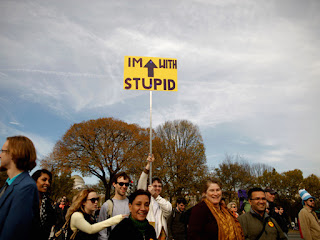 When you think about all the senseless controversy over creationism and evolution, it seems a little odd that God wouldn't mention something about that. What's the point in the creation myth, including the existence of Adam & Eve, when we'd eventually just find out that it's all a bunch of bullshit? By the time we learned it wasn't true, lots of people had become really attached to it all. Surely God would have seen that coming. Why didn't God just tell people how the world was actually created, and how humans actually got here? Did he think they couldn't handle it? I mean sure, they probably didn't need a physics lesson about stars cooking light elements into heavy elements, then exploding so that new stars and planets could form and eventually evolve living things. But just informing people of the rudimentary basics would have saved an incalculable amount senseless division over irrelevant old myths.


3. Hey everyone! This is the correct religion

This is actually one of the things that spurred my inquiry into Christian theology and history when I was a devout believer. Doesn't it seem strange that, instead of just telling all of humanity from the start which religion was the correct one, he instead waited until humans had been on Earth for over 190,000 years, then picked a small tribal culture in the Bronze Age Middle East in which to reveal the One True Faith? By that time, humanity had spread all over the globe and adopted thousands and thousands of distinct religious beliefs. And whenever people have been in a murderin' kind of mood, religion has always provided plenty of grounds to kick ass and take names. Even Yahweh told the people of Israel to kill the Canaanites, because they worshiped the wrong deity. Why didn't Yahweh just go over there, appear before them and say, "Hey! I'm Actual God. Quit worshiping that cow!" After all, he didn't seem to mind revealing himself to tribal Israel, right? That might have saved a lot of pointless bloodshed, no?
Christianity