Imperialism and the Christian West

- October 15, 2011
On Columbus Day last Monday, some friends of mine were discussing (via Facebook) some of the lesser-known qualities of Christopher Columbus. In elementary school, we all heard that he 'discovered America', and was generally revered as hero and inspirational figure in Western culture. Of course, it's not exactly true that he discovered anything. The Nords had already been to the Americas long ago, and – most obviously – lots of natives already lived there in mostly peaceful (if primitive) cultures. 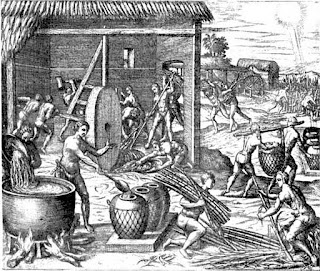 One of Columbus' most significant motives for his voyages was that he wanted to convert other cultures to Christianity. Maybe it's because of the Great Commission, but the spread of Christianity has always been deeply entrenched in Western imperialism. And as had often been the case throughout its history, Christianity was spread by the sword: as the Spaniards began colonizing the Americas and converting them to Catholicism, natives were systematically enslaved and subjected to extreme punishments for disobedience [1]. In subsequent decades, millions more were slaughtered in wars in which Europeans possessed not only more advanced technology, but also vast networks of resources which allowed them to endure the rigors of war far longer than natives, whose resources tended to be limited and centralized. And along with their "gifts" of slavery and genocide, the Europeans introduced smallpox, influenza, measles, whooping cough, and many other deadly diseases widespread in Western Europe which were devastating to native populations.

These days, we hear a lot of hot air from conservatives about 'Christian America'. They tell us that the values we cherish – freedom, liberty, equality, and opportunity – were bestowed upon us by the Judeo-Christian tradition. Nothing could be farther from the truth. The spread of Christianity, from the Crusades to the European conquest of the Americas, had nothing to do with spreading such noble ideas; instead, it was rooted in expansionism, imperialism, ethnocentrism and bigotry. Millions paid the price for the spread of Christianity with their lives, and we should never forget that many of the comforts we enjoy today are here in part because of the many who died unjustly under the march of Western imperialism. Even when our country was established, such ideals were more or less limited to white aristocrats. If you were poor, female, or non-white, those 'Christian values' were not for you.

The truth is, humanitarian values are secular. They transcend religion, culture, and history. Countless cultures existed peacefully for many thousands of years without the influence of Western religion, and many continue to do so today. If religion were the beacon of righteousness it's purported to be, one would imagine that it would have prevented, not inspired, the tyrannical imperialism and expansionism of the great Western civilizations.