- October 21, 2011
I'm bad at this. I keep thinking that I don't want to retread various arguments I've addressed many times before. But every now and then, they just pop into my head and my brain can't turn off. Then I think of some new angle or something, and have this insatiable urge to blog about it. If you're tired of hearing about the Kalam Cosmological Argument, by all means just skip this post. Go watch some horrible videos on Youtube and come back when I've posted about something new and interesting.

Why am I retreading this? Because earlier today, I was thinking about the Kalam and thought of another objection that I hadn't used in any of my prior posts. But instead of just writing yet another objection to one specific part, I decided that this post will take sort of an outline format and summarize all the major objections to the Kalam. If you can read this post and still think the Kalam is a good argument, you've won. I'll be out of ammo. This is it. I'm gonna give it my best, and then I promise to never post about it again. Maybe.

The Kalam Cosmological Argument (KCA) is this:
This is basically a minor re-formulation of the classic cosmological argument, or First Cause argument. But in the original argument, the distinction of things that 'begin to exist' was absent, leading to a conundrum: you can't say that everything has a cause, then claim that God has no cause. So it was tweaked a bit to clarify that it means, well, everything that isn't God. Because, presumably, God exists eternally and uncaused. If you found that assertion a little presumptuous, well, you'd be right. But the Kalam isn't immediately concerned with what the cause actually is. There are other arguments for that. The Kalam itself aims simply to establish that the universe requires a cause.

Simply put, it's an unsound argument because it commits a fallacy of composition. "The universe", regardless of how it's defined (multiverses, etc.), is not the same kind of thing as objects within the universe. The fact that causality is observed to affect matter, energy or objects within the universe does not imply that causality must apply to the universe itself. Indeed, it doesn't make much sense to take about causality without time, space, matter, and energy; nor does it make any sense to talk about things "beginning to exist" without respect to time – a property of the extant universe.

That's really all that needs to be said to demonstrate the argument as unsound. Theologians have ways of trying to dodge these things though, so read on for a more detailed explanation if you wish – in handy bulletin format!

These kinds of arguments are tricky because they involve words that can have multiple meanings; to address the argument, we have to specify precisely which meaning of the words we're using.
Based on the everything above, we can re-formulate the first premise to be both linguistically and scientifically accurate, but theists aren't going to like it:

How do we know that the universe began to exist? Well, point of fact, we don't. Theologians use the cosmic singularity – the moment at the epoch of the Big Bang when all the laws of physics break down – as the moment the universe began to exist. But it's not that simple.
We can see clearly that the second premise is entirely unfounded. But, to be charitable, we can re-frame it in a way that more accurately reflects the science, and complete the argument:
Obviously, once we phrase the argument in a way that is clear about the meanings of the words and is scientifically accurate, it becomes a hilarious non-sequitur that reminds me of this cartoon: 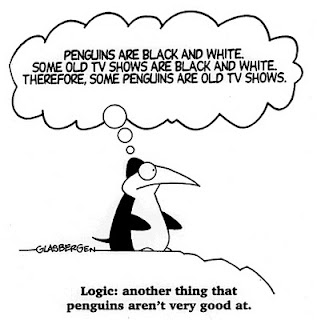 A quick thought on naturalistic alternatives

The reality is, we do not know how the universe got here. Atheists are often accused of arguing that something came from nothing, but we have no reason to believe the universe came from anything else at all. Perhaps the universe doesn't truly have an 'origin'. It may be, per Hawking's No Boundary proposal, that the universe simply is. Per some ideas in string theory, it may cycle infinitely in expansion and contraction. But we just don't know yet, and there are still some very big hurdles in physics to overcome before we'll even have a chance at knowing.

In countless discussions with theists I've had over the years, they've asserted that, in the absence of God, the burden is on the non-believer to provide an alternative explanation. This is false. The fact that a naturalistic explanation is either unapparent or unknown does not render a theistic or supernatural explanation valid by default. The skeptic's only burden is to demonstrate (as I've tried to do) that an argument like the Kalam has failed to prove what its proponents claim it proves. "I don't know" is an epistemologically valid alternative. That's actually one of the most liberating parts about being a non-believer: realizing that it's okay to say, "I don't know!"

Got all that? Whew. Hopefully I'll be done with this one for a long, long time. I'm going to celebrate with pancakes.
Kalam Logic Philosophy William Lane Craig