The conflict between science and religion

- November 20, 2011
I occasionally peruse the blog of former-frequent commenter, now-banned Jack Hudson, and he recently posted this video interview with physicist/theologian Stephen Barr, which I wanted to comment on. It's essentially promoting accommodationism – the idea that there's no inherent conflict between religion and science. I'll let you watch the video for yourself, but because it's fairly lengthy, I've summarized what I view as the central points below.


The themes are as follows:
This video does a great job of illustrating just how detached theologians are from the real issues concerning atheists. It's a terrible misunderstanding of our position at every front, and begs a few important corrections.


Science confirming the Bible (or not)

Before we get to the heart of conflict, let's take a look at the idea that science has confirmed certain things in the Bible, or certain things thought of by Christians. He mentions the Big Bang and the (misguided) notion that it shows a beginning of the universe, as well as Augustine of Hippo's theory of time.

There are several problems here. Firstly, if we were really to make a list of all the things that the Bible says about reality – about the origin of the universe, the development of life, biology, astronomy, etc. – the list of things proved wrong by science will surely be vastly longer than the list of things proved right. Even if we granted the tenuous notion that the universe has a beginning, the Bible gets just about everything else wrong. There's water before there's anything else, light before the sun, plants before animals, and the Earth forms before the stars. Further, Barr disingenuously frames the conversation as though to suggest that the idea of the universe having a finite origin was a uniquely Judeo-Christian idea. In reality, numerous cultures all over the world had such creation myths.

As to the notion that the Big Bang is the 'beginning' of the universe, I've devoted a fair bit of time to explaining why that's wrong, but here I'll let a physicist do it too. Suffice to say that the notion that science has confirmed anything the Bible has said is a case of cherry-picking both the Bible and the science.

And finally, to the idea that certain Christians have been instrumental in advancing science. So what? The philosophers of ancient Greece were pivotal, as were several atheists, deists, pantheists, and what have you. Funny how these Christian accomodationists fail to mention the advances in science that came from Muslims. Again, we have a case of liberal cherry-picking where the accomplishments of non-Christians are diminished or ignored entirely in order to create a false caricature of Christianity as some beacon of enlightenment.


Atheism, materialism, and the conflict between science and religion

The real conflict between science and religion doesn't come from who has the answers or who doesn't. For example, we could time travel back three millennia ago, and find that we lacked the technology to understand microorganisms. It could be rightly said that science had little to say on what, exactly, made people sick and how they ought to be treated. But that wouldn't render a supernatural explanation, such as demon possession, valid by default. We have to guard against a classic argument from ignorance fallacy – the fact that a scientific explanation is not forthcoming does not render a supernatural explanation valid by default. And yet, this is precisely the kind of God of the Gaps reasoning that many theists resort to, suggesting that a divine miracle was required for the origin of the universe or of life on Earth, simply because science has little to say definitively on these matters.

The conflict really lies not in the answers, but rather how we ask the question and, most importantly, how we pursue knowledge. The frequent accusation of 'materialism' is sorely misguided; there is nothing, in principle, which precludes us from discounting supernatural explanations. The problem lies in the fact that no one postulating supernatural claims has figured out a methodology by which any of the claims could be confirmed or falsified. Religious claims about reality are based primarily on revealed knowledge; and unfortunately for theologians, revealed knowledge, in principle, cannot be independently verified. 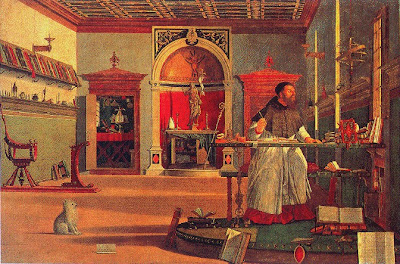 This leaves theologians in a precarious position. As the empirical methodology of science continually illuminates the world, frequently usurping religious claims about reality in the process, theologians are forced to retrofit their theology into the lexicon of scientific knowledge. This is precisely what Stephen Barr is doing in the interview when he claims that the Big Bang supports the Bible, yet selectively ignores the innumerable scriptures which science has proved false. I'm sure he would try to weasel out of that conundrum by suggesting that those inconvenient errors are just 'metaphors'. Of course, if science appears to confirm something... well, then clearly that was meant to be taken literally! Until the next scientific discovery proves it wrong, of course....

You'll never hear anyone using any sort of 'theological method' to understand reality, because one does not exist. That is the fundamental conflict between science and religion. Religion makes metaphysical claims about reality that cannot be independently verified – only awkwardly retrofitted into modern scientific knowledge. And while the independently verifiable methodology of empirical science leads to increasing consensus about controversial issues as erroneous ideas are systematically identified and discarded, the lack of such a methodology has the opposite effect in theology: as more specific unverifiable claims are made (e.g., about what God is, what God does, what God wants, etc.), the more divisiveness emerges in the theistic community. This is the watermark of a failed epistemology, and that is precisely what religion is.