- November 27, 2011
The other day on Facebook, a lesbian friend of mine pondered why Christians are not as anti-divorce as they are anti-gay-marriage. "You know", she said, "to preserve the 'sanctity'". This elicited the predictable response from several conservative Christians who opined about 'scripture' and 'Biblical marriage'. It is ironic that Christians don't crusade against divorce nearly to the extent the crusade against gay marriage, particularly because Jesus specifically stated, in Matthew 5:28, that it's a sin to divorce unless your spouse had an affair. That's every bit as much scriptural justification as their crusade against gay marriage – more actually, since Jesus himself never said anything about gay marriage.

Let's get something straight: the line that conservatives push about Biblical marriage being between one man and one woman is just something they made up. This is a classic case (there are lots!) of holier-than-thou Christians not actually reading their Bible. Traditional Biblical marriage is polygamy. Abraham, David, Jacob, Solomon, Moses, Saul, and many other patriarchal 'heroes' of the Bible had many wives. And nowhere does the Bible condemn it, at all.

My thought is this: as long as you're not hurting anyone else, marry whomever you want. Research on same-sex marriages overwhelmingly shows them to normal, healthy relationships; and children raised by homosexual parents are as well-adjusted as anyone else. Not that reality has ever stopped religious conservatives from believing stupid things. But you do have to love the irony. Yeah, sure, let's go back to 'Biblical marriage'. Can I have a few hundred sex slaves... er, concubines to go with my dozens of wives? Sure I can!

Of course, Christians will undoubtedly try to weasel out of that one by saying polygamy was only acceptable for the 'culture at the time' – you know, the way they do with slavery. But, like slavery, polygamy is never explicitly condemned. Funny that God remembered to command his people to stone rape victims and avoid combining fabrics, but forgot things like slavery and polygamy. The point is, if you want to use scripture to justify your bigotry, it's easy to cherry-pick. With a book as confused and obfuscated as the Bible, what else can Christians do? 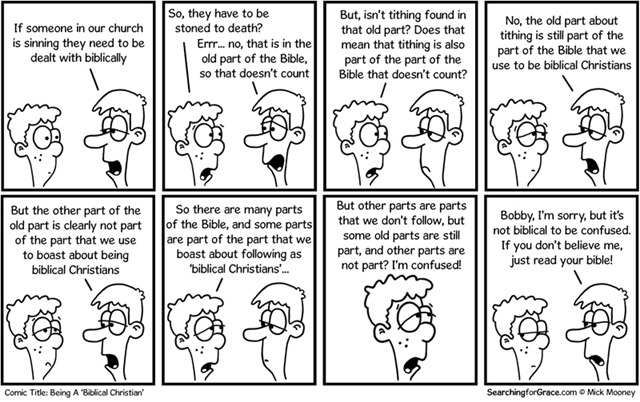