- December 07, 2011
See if you can spot the fallacy in statements like these:
With all these types of statements, while they may cause a skeptic's bullshit detector to start buzzing, it can be a bit difficult to identify exactly where the fallacy lies.  They're used often in the rhetoric of theologians as a means of giving faith-based ideas the illusion that they are grounded in reason, but their usage reveals a poor understanding of how rational inquiry actually works.

Technically, the fallacy at work here is assuming the consequent, where necessary and sufficient conditions are confused. For example, an intuitive sense of right and wrong may be necessary to prove that we are created to adhere to a Moral Law, but it is not a sufficient condition for proof since there may be other explanations for our intuitive behaviors (and indeed there are). Virtually all primitive beliefs about gods controlling the weather, volcanoes, or natural disasters 'comport' with observation, but that is not enough to prove them true – a rational explanation must be falsifiable. In the words of philosopher Stephen Law:


"What a scientific theory requires if it is to be credible is not merely consistency with the evidence, but confirmation by the evidence."

That's a subtle but vital distinction, and it's precisely where theists stumble. Falsifiability is what allows us to gain reliable knowledge that a proposition is valid. If a proposition cannot be potentially disconfirmed, there is no way to identify whether it is erroneous or not. As an example, let's go back and look more closely at the first statement. Here it is again:

If "order and complexity" are taken as the evidence, how could we tell the difference between a finely-tuned universe and one that isn't finely-tuned? After all, we don't have access to a universe in which order and complexity do not exist which might allow us to make comparisons. The theist's argument, then, is merely a tautology. To phrase it as a syllogism:
Without access to a universe that does not contain order and complexity, there is simply no possibility of confirming or falsifying the first premise. The conclusion, then, is merely a re-statement of the premises. The conclusion cannot actually follow from the premises since the first is unfalsifiable, and therefor invalid.

A theologian might respond to all this by suggesting that scientific inquiry does the same thing: it creates a hypothesis, then interprets the evidence to fit. This type of claim is common among Intelligent Design advocates, who suggest that it's simply a difference of inference: we all observe that species change over time and have shared genetic traits, but 'Darwinists' infer common ancestry while ID advocates infer a common designer. This misses the side of the barn as to how science actually works, and it all comes back to the necessity of making falsifiable predictions. I'll even use an example from evolution:

We share almost all of our genetic material with chimpanzees. But there's one important difference: humans only have 23 pairs of chromosomes, while chimps have 24. For the theory that we share a common ancestor with other primates, this could be a big problem, because you can't just lose a chromosome – the offspring wouldn't survive. So there were one of two possibilities: one is that evolution was wrong; the other is that we do have all 24 chromosome pairs, but one of them had fused. Importantly, this is a testable hypothesis that can either confirm or falsify evolution. And sure enough, a definitive study published in the journal Nature proved that indeed, Chromosome 2 of the human genome is fused. So we are not, as the IDer's claim, simply making inferences to fit observation – we are establishing the theory by confirming testable hypotheses with evidence. 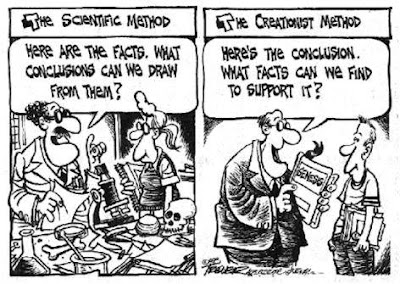 This falsifiability is the vital component that is missing from the tautological arguments of theologians. You cannot test the premise that our moral intuitions come from God, or that the laws of the universe are fine-tuned, or that God designed us to have cognitive faculties. That's why theists usually resort to arguments from ignorance, assuming that if a scientific explanation is not forthcoming, a supernatural explanation becomes valid by default. In reality, if an answer is not forthcoming, we defer to the null hypothesis: fancy talk for I don't know. And if we are to know, we must use an epistemology that has demonstrated itself to be reliable and valid through the confirmation of falsifiable predictions. Theology sorely lacks any such methodology, and is therefor doomed to the arbitrary whimsy of 'revealed knowledge' (God revealed the truth to me/him/them) that, in principle, can never be independently verified.

It's a deft retreat: take reason as far as it will go, and when you hit a gap, fill it with faith instead of simply admitting that you do not know. But it's a shallow ruse, and it's one that reveals the desperate emotional trappings of even the most 'sophisticated' theologian.