The language of dolphins


Researchers in the United States and Great Britain have made a significant breakthrough in deciphering dolphin language in which a series of eight objects have been sonically identified by dolphins. Team leader, Jack Kassewitz of SpeakDolphin.com, ‘spoke’ to dolphins with the dolphin’s own sound picture words. Dolphins in two separate research centers understood the words, presenting convincing evidence that dolphins employ a universal “sono-pictorial” language of communication.


I've read several books by the primatologist Frans De Waal, and the central theme of much of his writing is that humans are not as different from animals as we would care to admit; or rather, animals are much more like us than we would care to admit. It's perhaps comforting to reassure ourselves that we, with our superior intellects, are entitled to complete dominion over the Earth and all the instinct-driven beasts within it.


Then God said, "Let us make human beings in our image, to be like us. They will reign over the fish in the sea, the birds in the sky, the livestock, all the wild animals on the earth, and the small animals that scurry along the ground." [Gen 1:26, NLT] 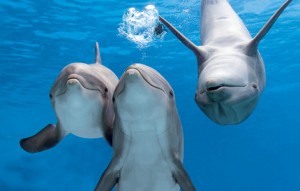 But nature is not merely "red in tooth and claw", and while the "survival of the fittest" is generally (falsely) portrayed as an every-animal-for-itself struggle for survival, the truth is that virtually all animals survive by living gregariously – in cooperative social hierarchies. In many mammals, particularly our primate cousins, we can see analogs of many behaviors long thought to be uniquely human – altruism, self-sacrifice, nurturing the weak and wounded, sharing food, and much more. We see emotions – pain of loss, joy, amusement, frustration – and we see complex social cultures and language.

So when I see something like this – the language of dolphins being decoded and understood – it reinforces to me that De Waal is right: animals are much more like us, and us more like them, than we've long believed. But for many, that's a scary idea. For now, we tend to view animals as objects – for our consumption, our entertainment. If we begin to view animals as conscious creatures like ourselves – with thoughts and emotions that in many ways mirror our own – we might have to change the way we treat them. And, perhaps even more daunting, we may have to change the way we view ourselves.