- December 26, 2011
I haven't been blogging a ton lately, and this post is just to tell you that it'll probably continue to be sparse. That's because I've got 700 or so pages to absorb: 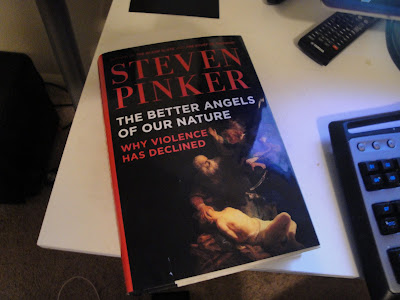 I read the first 16 pages or so last night. If you're unfamiliar with the book, Steven Pinker (a cognitive psychologist at Harvard, well-known in the secular community) argues, using mountains of research, that – contrary to the popular assumption – our world today is the most peaceful one in human history. Per capita violence, in virtually every area, is the lowest it's ever been. He then uses modern research in psychology, sociology and economics to explain why this is so.

He begins the book by talking about the violent Bronze Age societies, and after an unsettling tour through the appalling violence of the ancient Greeks, the Old Testament (much of it sanction and/or commanded by God), the crucifixions and bloody games of Rome, the use of torture to force confessions from Jews in the Inquisition (why not, if brief pain could save their souls for eternity?), and the celebration of the grisly deaths of several Saints, he concludes with a beautiful rebuke:


[The] point of this discussion is not to accuse Christians of endorsing torture and persecution. Of course most devout Christians today are thoroughly tolerant and humane people. Even those who thunder from televised pulpits do not call for burning heretics alive or hoisting Jews on the strappado. The question is why they don't, given that their beliefs imply that it would serve the greater good. The answer is that people in West today compartmentalize their religious ideology. When they affirm their faith in houses of worship, they profess beliefs that have barely changed in two thousand years. But when it comes to their actions, they respect modern norms of nonviolence and toleration, a benevolent hypocrisy for which we should all be grateful.

This is gonna be a good book.