Why the Mass Effect 3 ending kind of sucked

- March 21, 2012
I finished Mass Effect 3 last night. Like a lot of people, I wasn't really happy with the ending. I'm gonna explain why, but I have to put this disclaimer here: full spoilers ahead! If you're going to play the game, do not read this!

I'm a huge fan of the Mass Effect games. In my view, they're the first science-fiction video games that are truly on the level of any other great sci-fi epic in any other medium – books, films, comics, etc. It's a rich and beautifully realize universe filled with choices that have meaningful consequences. Its characters are well-developed, and it's hard not to feel attached to them – I was genuinely sad when several characters from the first two games died in the third. And in the end, as my Shepard sacrificed herself, I was sad that she wouldn't have the white picket-fenced house she'd talked about with her partner, just before she'd said "I love you" and went on what was for all intents and purposes a suicide mission – yes, Mass Effect allows for well-developed homosexual and bi-sexual relationships between characters.

But the end of the trilogy left me a bit disappointed. Narratively, it's bold: the entire Mass Effect universe is gone. Humanity (and all the other races) have to start over in one way or another (depending on which ending you get). It'd be impossible to create a sequel to the series without retconning everything. Any future Mass Effect games will simply have to be other happenings elsewhere in the galaxy before or during the events of the original series, but it's hard to imagine anything could top the epic-ness of a sentient synthetic race trying to wipe out all advanced civilizations in the galaxy. And I give kudos to the writers at Bioware for staying away from a predictable happy ending.

Narrative balls aside though, there are a couple of issues with the ending. The first is that, almost exactly like Deus Ex: Human Revolution, the player's choices are totally disconnected from the ending. There are three endings, with one (the supposedly ideal ending) only being available with a certain level of completion. But all that happens is that, after a lengthy exposition about what the Reapers actually, are, the player makes one of three choices. A, B, or C. That's it. What should have happened is that the ending should have been a culmination of all the choices the player made over the course of the trilogy. But in the end, most decisions are of no consequence. To see the other endings, all it takes is to replay the last level and try the other choices. Ho-hum. 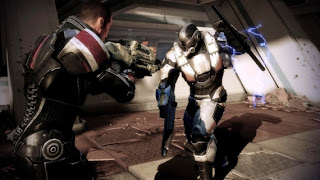 The other problem is that it ends up exposing the narrative weakness of the Reapers. Conceptually, it's a great idea: every 50,000 years, this malevolent alien machine-race wipes out all the advanced civilizations in the galaxy. In the final minutes of the game, the exposition tells us why the Reapers do what they do, and... it doesn't really make much sense. Much like the series Lost, things were better when they were mysterious. The Reapers are supposedly preserving biological life from being destroyed by warfare with synthetic life. In other words: synthetic race kills organics so that organics will not be killed by synthetics. Each 50,000 year "cycle" sets organic life back until they become advanced enough to create synthetic life, and then the Reapers come again and kill everything. That's why the "best" ending is when organic and synthetic life are combined into the next evolution.

Given even the modern interest in transhumanism, and the fact that in Mass Effect most humans and aliens are partly synthetic anyway, it seems like the "best" ending would have been accomplished anyway without the whole galactic-genocide thing. The game doesn't really explain why synthetic and organic life couldn't co-exist peacefully anyway; the "war is inevitable" thing is especially incongruous when, prior to the final battle at Earth, the Quarians make peace with the synthetic Geth after centuries of war.

So, Mass Effect goes out in epic fashion, but leaves some pretty glaring narrative loopholes and disconnects the player from the game in the final moments. Overall, it's still an outstanding game, but personally, I feel like Mass Effect 2 is overall a bit better of a game; the plot, with the intrigue surrounding Cerberus, was a little more interesting to me. And maybe it's just me – and maybe it's because I have all the DLC for ME2 – but there didn't seem to be as much content in this game. I beat it in around 23 hours, and that was being pretty damn thorough – completing most side missions (bugs killed a couple) and exploring nearly all of the star systems (most of which is more busywork than narrative content). I checked my last ME2 save, after completing the DLC "Lair of the Shadow Broker", and I clocked in just above the 30 hour mark. It seems like there was more time put into CGI sequences than pure content for the series finale.