It may or not be a miracle

- April 14, 2012
Back in the recent debate about science and god, Ian Hutchinson made the 'argument', if you want to call it that, that miracles really do happen. His knock-down, airtight argument: I've seen miracles and science can't disprove it, so there.

Whenever people claim to have either personally experienced or witnessed something supernatural, my response is usually something like this:


Just because a rational explanation for what you experienced is not immediately apparent to you, or to those around you for that matter, does not mean that a rational explanation for your experience does not exist. How do you know you didn't just see or feel what you wanted to? What self-critical thought have you engaged in to try to rule out confirmation bias, wishful thinking, and groupthink?

Of course, the response is always some bullshit like, I just know in my heart what I saw. I know that it was real. No, fucktard, you don't. A strong conviction is not the same thing as knowledge.

And now, there's another little miracle cult, this time in Brisbane. Some young adults and teens are parading around the streets offering to magically cure people of their ailments:


The Pentecostal group Culture Shifters says it has healed people suffering from cancer and multiple sclerosis and is developing a large youth following.

Children from the group have been approaching people at random on the street, prompting alarm from parents and warnings from doctors for the sick to seek medical attention.

Ah yes. "Developing a large youth following". Everyone know young minds are more pliable than those of adults, and less susceptible to diseases of the mind that hinder faith, like critical thinking and skepticism. But faith healing isn't just stupid – it's dangerous. 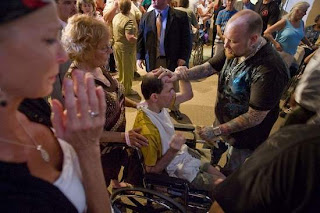 And really, on what are they basing their claims? If God could really heal people en masse like this, why don't these preachers just go to hospitals? Why don't chaplains adopt this methodology which, according to the group, has over a 95% success rate? That's far better than any science-based medicine I've ever heard of. How do they know when they've cured someone of, say, cancer? Do they just ask people on the street if they need 'healing'? I'm sure, of course, that they require people to provide medical documentation of their current illness and that they do rigorous follow ups with the patients and their doctors, just like Benny Hinn does. What's that you say? Faith healers never do that? Of course they don't. They're either delusional, or they're con artists like Peter Popoff.

One of my favorite quotes from PZ Myers comes to mind:


Science is simply a process for examining the world, and anyone can do it, even if you don't have a lab coat. If something has an effect or influence, you can try to examine it using the tools of science — so when someone announces that gods cannot be detected by observation or experiment, they are saying they don't matter and don't do anything, which is exactly what this atheist has been saying all along.

If faith healing really worked, there would be mountains of rigorous documentation; indeed, it would make the entire field of medical science totally obsolete. Instead, all we have are anecdotal claims that, most curiously, are never corroborated by independently verifiable evidence. But hey, who needs evidence when you just know?